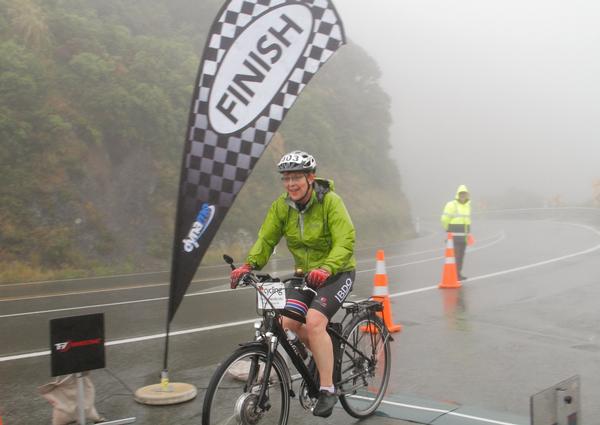 The BDO Wellington to Auckland Cycle Challenge got underway in testing conditions in Lower Hutt today, with the 160 riders facing conditions more akin to the middle of a winter’s storm than a summer’s day as they rode to the top of the Rimutaka Hill and then through the Wairarapa to Masterton.

Not daunted by the rain, cold and wind though was Wellington Mayor Celia Wade-Brown who not only started stage one early this morning, but then rode to the summit of the Rimutaka’s with the other competitors – albeit with the assistance of a battery powered bike!

The Mayor was one of a number of riders to suffer a puncture in the wet conditions but received roadside assistance and sped past the ‘normally aspirated’ riders to the top of the Rimutaka Road and the end of stage one.

“That was a lot of fun, passing plenty of people on my electric bike!” said Wade-Brown upon crossing the line to chat with race organiser Stephen Cox.  “Despite the weather I have really enjoyed getting out there, it really was a lot of fun and a great event to be part of.”

Wade-Brown had earlier congratulated all riders on their participation and acknowledged the great charity that riders are raising money and awareness for, with Multiple Sclerosis the official event charity.

Also in amongst the field was former Sports Minister and Labour MP Trevor Mallard.

The overall lead after two stages and the first of seven days on the BDO Challenge is Jason Thomason (Taranaki), with Lindsay Peake (Hamilton) and Michael Jones (Thames) within 6 seconds after one of the toughest days in the 6 year history of the event run by former Olympian Stephen Cox and his company Dynamo Events.

The ride is essentially an opportunity for riders of all abilities to relive the great days of the Dulux North Island Tour, with group one catering for the better performed riders and groups two and three for those less inclined to race and more keen on riding at their own pace.

The new BDO Corporate Teams Challenge proved very competitive with 11 teams on the start line, all chasing the first prize valued at $100,000 of cash, goods and services to be donated to a charity of the winning corporate teams choice. Leading the way after day one is 2 Degrees, followed by Invacare and ASB.

Day two of the BDO Wellington to Auckland Challenge sees the riders leave Masterton at 8.30am with stage one riding to Pahiatua and stage two in the afternoon taking riders into Palmerston North with the first riders expected into Palmy at approximately 2pm with prize giving at the Palmerston Club from 5pm.

The BDO Wellington to Auckland
Schedule

Sunday 9 Feb
Stage 1 8.30am        Lower Hutt to the summit of the Rimutaka Hill
Stage 2 Midday        Ride through the Wairarapa from Featherston to Masterton