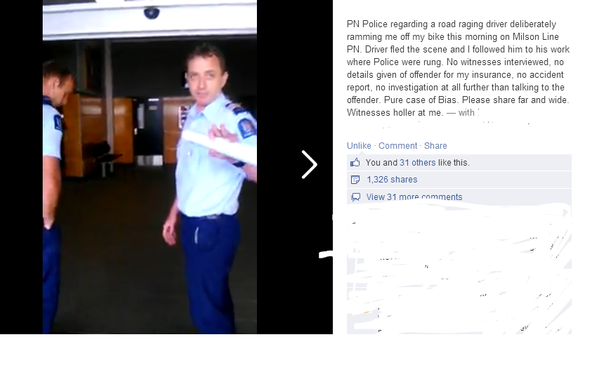 "I'm here because your officer didn't do his job" - motorcyclist CREDIT: Motorcyclist Involved

DEVELOPING STORY: infonews.co.nz has been made aware of an incident that took place in Palmerston North.

A man who was hit off his motorbike by a road rage driver was kicked out of Palmerston North Police Station after he asked for an investigation to be made, even being told he would be arrested.

The motorcyclist says that their was no accident forms, investigations, names of the offender taken, pictures taken of damage and no witnesses interviews taken.

NP Linked has spoken to a New Plymouth Police member who said that what the police in Palmerston North did was wrong.

"The police were in the wrong. Its obvious that normal procedures were not taken. They need to be dealt with" the member of Police said.

A video was uploaded to Facebook of the encounter made by the motorcyclist and police.

A statement from the motorcyclist is due tommorow, where we will have more information on this developing story.