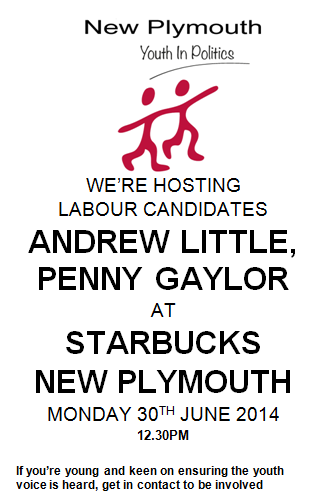 Labour Party candidates to meet with Youth in Politics

"It's an oppurtunity for young people from different groups to come together to speak with Labour Party candidates about how we want our future to look,"

"we've got a few members from Youth in Politics who are looking forward to it, and theres also New Waves staff, and Youth Working Party members coming along too." he said.

New Plymouth District Council Youth Working Party member Michael McLeod told Youth in Politics "I have seen some of the MP's on TV. Now, I get to see them in reality."

"It's going to be cool to be able to talk to them about how I think the future should be shaped" he said.

New Waves is a organization which helps young people develop into a happy adult and they're part of the group meeting with Labour candidates tommorow too.

Michael Riley says he was impressed that a candidate based outside of North Taranaki was coming to New Plymouth to meet young people wanting to build a brighter future.

"It just shows how far some of these candidates want to go to ensure our youth voice is heard, from all areas of the nation" he said.

The lunch with the candidates has been confirmed and is ready to take place tommorow at Starbucks from 12.30pm.

Youth in Politics is inviting all members of the public to attend.