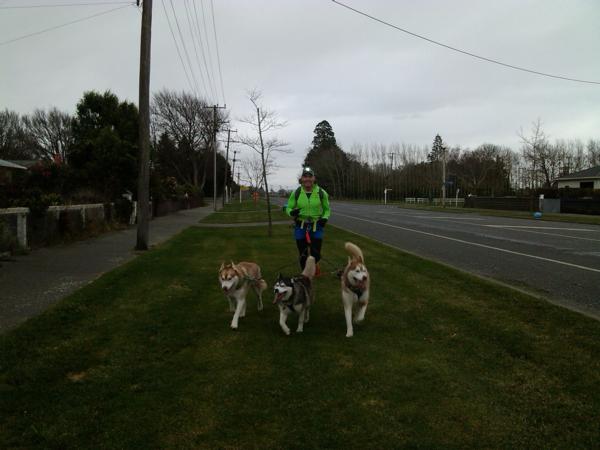 Mark Roberts from Rakaia is a different kind of long distance runner, why? Because when he runs he does so with dogs attached physically to him! His main companions when he hits the trails are his three Siberian Huskies Jinx, Cheesy and Beavis and the sport is Canicross (cross country running with dogs). Although the sport has very little interest in New Zealand, it is huge in Europe and other parts of the world, with both a European and World Champs.

Due to there being no formal races in this country, he intends this year to compete in the Midnight Madness Sled Dog Race in Taupo (this Friday). The dry land event is ran over 55km and is made up of competitors who have teams of up to 8 dogs pulling wheeled carts through the Kiangaroa Forest, with the exception of Mark, who will be running it.

Mark works as a companion animal nutritional scientist for K9 Natural, a New Zealand dog and cat food company. He travels significantly with his job, but mentions “I try to get some serious mileage on the dogs when I’m home, but train alone obviously when overseas”. I have notched significant distance over the past year in locations such as Bangkok, Dusseldorf, Manchester, Seattle and San Diego. He notes that once in Vancouver, he got up at 2am to run 60km before work!

Although not officially allowed to enter the race (for fear of beating those more standard entries), he expects to do well and believes he has an above average chance of winning the event.