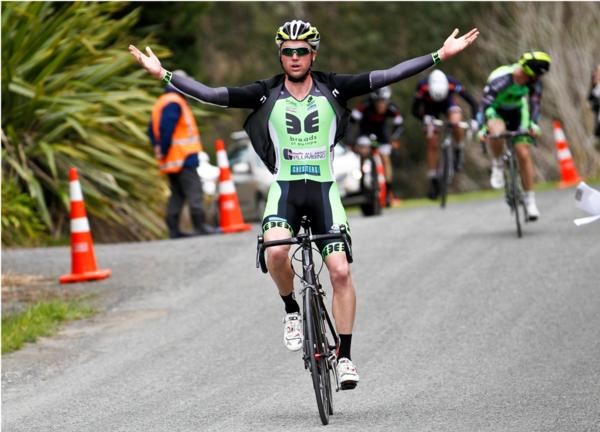 Tom Hubbard (Breads of Europe- All About Plumbing) won the elite race of the Benchmark Homes Cycling Series near Nelson today CREDIT: rickoshayphotos

Previous experience on the Moutere course near Nelson played an important role in Tom Hubbard’s (Breads of Europe- All About Plumbing) winning effort in the elite race of the Benchmark Homes Cycling Series near Nelson today.

Christchurch based Hubbard, who won in three hours and 11 minutes, won a stage of January’s Tour de Vineyards on the same course, saying the success gave him valuable confidence heading into today’s 127 kilometre race.

“I had really good feelings about the course after tasting success at the Vineyards Tour earlier this year,” Hubbard said. “The course suits me and we raced with the same tactics that proved successful in January.”

Hubbard, who took a three month break from cycling earlier this year, only got back on the bike in July after getting enthusiastic again watching the Tour de France, said he ‘owed it to his family, friends, sponsors and team’ to get a result today after all the support he received during his time off the bike.

“It was the perfect day,” he said. “The team rode exactly to plan so to get the win was very satisfying.”
Hubbard was part of a four person break that included his team mate Fraser Hewett, Sam Dobbs (TotalPOS) and Tim Rush (Team Calder Stewart) that got away after only 10 kilometres of racing. The group worked well together to build a lead of over three minutes that the chasing bunch could not close down in the dying stages of the race.

“We were all strong and everyone worked so I knew if we kept it together right to the end we’d get there ahead of the chasers, which we did.”

Hubbard was quick to praise team mate Hewett, stressing how his ‘unselfish support efforts made a massive difference,’ especially when Hubbard thought he could have potentially won the race himself.

With elite men’s series leaders Brad Evans (Team Calder Stewart), Dan Barry (Tasman Wheelers) and H&J’s Outdoor Worlds Cameron Karwowski all away racing overseas, today’s results moves a number of riders into contention to claim the overall series with only one race remaining, the iconic Benchmark Homes ‘Hell of the South,’ and Faringdon Team Time Trial on 4 October in Canterbury’s Selwyn District that features a number of gravel sections.

Rowlands won the tough third round, the Ocean Ridge Hanmer Springs to Kaikoura race in May, and today showed the form that netted some good results racing in a number of amateur events in Europe over theNew Zealand winter, including the World Amateur Road Champs in Slovenia two weeks ago where a broken wheel five kilometres from the finish cost him a podium spot.

The Wellington rider bridged over to Velocity’s Michael Sleeman after the first ascent of Neudorf Hill and the pair were soon joined by Smallman with over 60 kilometres of racing left. Sleeman was dropped from the leaders with 40 kilometres left.

“It was satisfying to back up from a good month in Europe,” Rowlands said. “I got back 10 days ago and was keen to race the last two Benchmark races, so I’ll do the last one next month then I’m looking forward to taking a break.”

Warmup Cycling’s Lee Johnstone won the bunch sprint that came in a minute after Rowlands and Smallman to claim third overall, but more importantly, was the first rider home in the masters 45 to 49 age classification, so has moved into the leader’s jersey for that grade. Smallman increased his 35 to 44 age classification lead over Scott Wilder (Dad’s Army), who was fourth overall, and third in that age group.

Brent Marryatt was the first over 50 rider home, finishing twelfth overall, a result that sees him move up to second in the series for the over 50 riders, but with one race left it’s not enough to overtake the classification  leader, Jorg Engelbrecht, who was fourteenth today, and third in the over 50 age group.

The result moves Lucas, who heads over the Tasman on Wednesday to race in Australia’s National Road Series Capital Tour that starts in Canberra on Friday, to within one point of Fraser in the series classification.