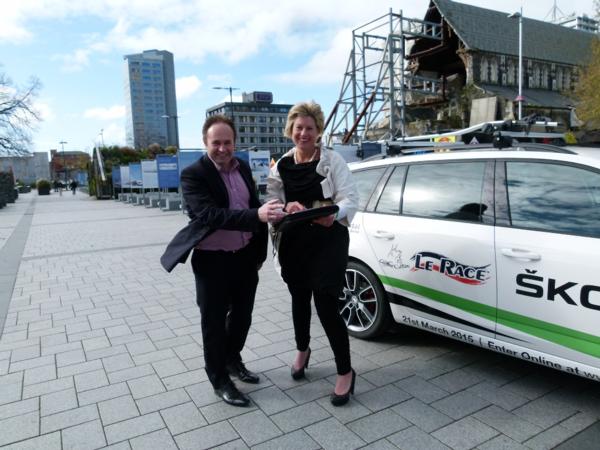 The iconic 100 kilometre Christchurch to Akaroa Coffee Culture Le Race will provide another boost to Christchurch’s rebuild in the central city, when it will start again in Cathedral Square on 21 March next year for the first time since the regions devastating earthquakes.

It’s been four years since the event started with the 8am bells of Christchurch Cathedral ringing and new owner Sheree Stevens, from Not Just Events, says she couldn’t be happier.

“It’s a real boost in the arm for the central city and obviously for the event,” she said. “It’s another signal things are moving in the right direction for the city to have the event back to its original starting point.”
Stevens said getting the start for Le Race back into Cathedral Square was a ‘collective team effort’ that involved the Christchurch City Council, CERA and SCIRT.

"I was really keen to get the start back into the square,” Stevens said. “It will also send a clear message to those from outside Canterbury that the city is getting back on its feet. I really hope we’ll see more cyclists from outside the region come and do the event.”

Christchurch City Councillor Glenn Livingstone agreed it was great news to have Le Race ‘back in the city where it belongs.’  “It's a long-standing event which has fantastic support from the local community and it's definitely another important step in the rebuild of the city," he said.

Stevens said Le Race, being held for the sixteenth time next year, was an event that was on many people’s bucket list to do as completing it is a real badge of honour,’ but stressed that for those not wanting to do the whole route as an individual there were options of doing it in a two or three person team.

“There’s a real fun atmosphere around Le Race with its quirky links to the French elements in Akaroa. We’re had French maids, French super heroes and even a French themed roster tackle the course, many of them in teams.”

Le Race has a mixture of challenging hill climbs, fast flats and exhilarating downhills that travels from Christchurch, across an extinct volcano, to the French surrounds of Akaroa with many cyclists and their supporters choosing to stay overnight in Akaroa after participating in the event.

Girdlestone also won the ‘Ross Bush Memorial Trophy’ awarded to the fastest junior rider in honour of Ross Bush’s life and cycling legacy; Bush was killed in the 2011 Canterbury earthquakes.