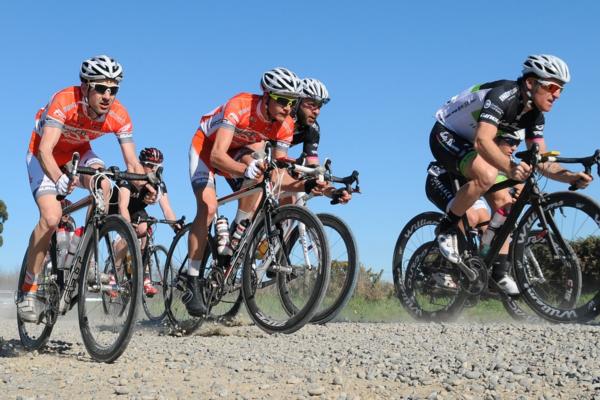 Anthony Chapman (left), Will Bowman, Jason Allen and Gordon McCauley fight for position on the gravel in the Benchmark Homes Hell of the South in 2012. CREDIT: Bruce Wilson Photography

World Tour professional Hayden Roulston headlines a strong elite men’s field that features a number of New Zealand’s next generation of cycling talent in the final round of the Benchmark Homes Elite Cycling Series in Canterbury’s Selwyn District on Saturday.

Roulston, who will ride for a strong Scotty Browns team on Saturday, is back in Christchurch after an illness-affected northern hemisphere season racing for his Trek Factory pro team which he rated as solid but not spectacular. Roulston will potentially ride in support of his Scotty Browns team mate Jason Allen who lies second in the overall series classification, 14 points behind Dunedin’s Brad Evans (Calder Stewart).

There will be good interest in the performance of a number of the county’s next wave of developing professional talent, many of them riding off the back of European campaigns for a variety of club and continental pro teams.

Seven riders are still in contention for the overall elite men’s title. Evans, who built his lead with strong showings in the first three rounds of racing before heading to the Unites States to race during the New Zealand winter, has the Under 23 classification sewn up, but former Commonwealth Games Track representative Allen is only two points clear of veteran and double winter and summer Olympian Chris Nicholson (Tasman Wheelers) and his team mate Daniel Barry who has been racing in Australia’s National Road Series for Budget Forklifts with Sam Horgan who is riding for Scotty Browns on Saturday. Others within striking distance for overall honours include Michael Vink (Scotty Browns) and last rounds winner in Nelson Tom Hubbard (Breads of Europe All About Plumbing).

Tom Vessey from Southland based H&J's Outdoor World Avanti+ should lead the charge of the ‘young gun’s racing on Saturday. Vessey rode for Belgium based continental team T.Palm-Pôle Continental Wallon, and is just one of the young riders in the field capable of a strong showing and upsetting some of his older more experienced rivals during Saturdays 127 kilometre elite men’s race which features two sections of gravel the riders tackle several times.

Vessey will have good support from team mate Josh Haggerty, a former Junior Worlds track representative and national junior road champion, who capped off a memorable last year as a junior last year wining all three under-19 men's jerseys in the 30th anniversary of the three-day Yunca junior road cycling Tour of Southland.

H&J's Outdoor World Avanti+ has several options to play with Matthew Zenovich, another young rider who has also had a solid season in Europe, also more than capable of pressing claims for the win. Zenovich became the first Southlander in 10 years to win a stage in the Tour of Southland last year.

TotalPOS Cycling Team leader Sam Lindsay could also threaten on the challenging route. Lindsay, who has had three season overseas riding for French Division National 1 team, Team Vulco vaulx en velin, has had several solid performances in the series without a breakthrough result.

National Under 23 road racing champion Hayden McCormick, who had his second season riding for World Pro Tour team Lotto Belisol’s Development Team, and Jason Christie, who is back on the bike after recovering from a crash while racing in Asia for the CCN continental cycling team, are riding in a support role for their Breads of Europe All About Plumbing team leader Hubbard who said it was a ‘mathematical mine field’ working out who could win on Saturday.

“I know there’s a chance of winning, but there are a few calculations and things that have to happen to get the result we want,” he said. “It’s flat racing but there’s little doubt the gravel sections will produce the winning selections.” Hubbard said his was keen for his Breads of Europe All About Plumbing team to hold on to its teams classification lead. It holds a narrow six point lead over Nelson’s Tasman Wheelers.

This round is unique in the series as it features two sections of gravel, or ‘pave,’ that riders tackle several times; the elite men will hit the first gravel section three times while the masters and women ride it twice during their 99 kilometres of racing. The final section of pave comes in the closing stages with only 16 kilometres left; the chances of it proving decisive in the final results are high.

Without a win but after making the podium three times during the series Ian Smallman (Team Thule Racing) has an unassailable lead in the master’s 35 to 44 grade while things are very tight at the top of the masters 45-49 classification with Warmup Cycling’s Lee Johnstone only leading Blair Stuthridge (Thule) by five points with Dunedin’s Paul Gough (Cycle World) only two points behind Stuthridge.
Wellington’s David Rowlands will be looking to make it three wins from three starts in the series riding for the strong Armstrong Subaru team that also features the well performed Reon Park, Glenn Gould, Glenn Rewi and Darrell Kircher.

Armstrong Subaru are locked on equal points at the top of the masters team’s classification with Team Thule Cycling placing extra emphasis on the team time trial that opens racing on Saturday.

Like his Thule teammate Jorg Engelbrecht has the over 50 masters series wrapped up but women’s leader Elyse Fraser is only one point clear of her Benchmark Homes team mate Sharlotte Lucas with Nelson’s Karen Fulton (Tasman Wheelers) 14 points behind Lucas.

Dunedin’s Georgia Catterick has to hold off her Cycle World Fairweathers team mate Lydia Rippon to win the women’s Under 19 classification while Christchurch cyclist Tracey Clark is only three points clear of Catterick’s mother Michelle in the over 35 category.

Racing warms up with the eight kilometre Faringdon Team Time Trial before the battle in the Benchmark Homes Hell of the South gets underway.