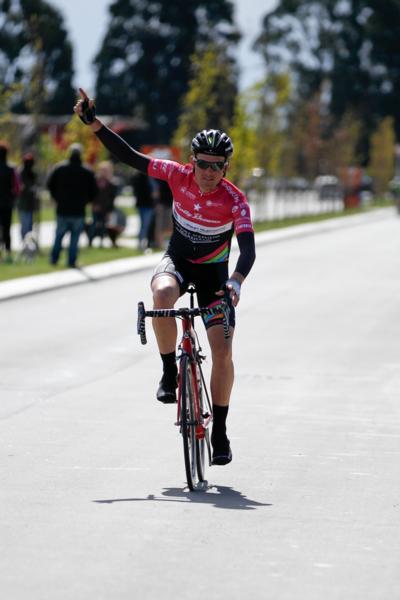 Michael Vink won the iconic 'hell of the South' last round in October to claim the overall series title. CREDIT: rickoshayphotos

Riding for the strong Scotty Browns Cycling team, Vink was part of an early break of five riders that grew to 10 that at once stage had a lead of over four minutes. Racing featured two sections of gravel the riders tackled several times, and it was with 20 kilometres of racing and only one section of gravel left that saw Vink make his winning move, forcing a selection three riders that also included Alex Hooper (Bread of Europe All About Plumbing) and Matthew Zenovich from Southland’s H&J's Outdoor World Avanti+ team.

It was Vinks first win the Benchmark Elite Series in six years of racing, and he said he knew it was ‘technically possible’ to claim the overall series win as well, but a few things had to go his way.

“It was tough racing and there were some side winds, but once we were away we all worked well to establish a lead and then I had to start working out the best option to win,” he said. “I knew some things had to fall my way to claim the overall series win, and for once they, did so I’m pretty happy.”

With four kilometres left of racing Vink attacked his breakaway companions and put his time trialling skills to good use to solo to victory winning the 127 kilometre race in three hours and ten minutes, 17 seconds clear of Hooper who out sprinting Zenovich to take second.

The win tied Vink at the top of the elite individual points table with the Under 23 classification leader, Dunedin’s Brad Evans, but Vink claimed the overall series elite win based on finishing ahead of Evans today.

World Tour professional Hayden Roulston rode for the Scotty Browns team, and finished comfortably in the bunch today as he looks to round out his professional season with two more events overseas, including the Tour of Beijing that starts on Friday.

Breads of Europe All About Plumbing won the Faringdon elite team time trial that got racing underway, confirming their team’s classification series win.

A crash marred racing in the 99 kilometres masters’ event, resulting in the field across the three age group classifications being heavily disrupted and slipt. Several of the leading riders were caught up in the crash, with most of them managing to ride their way back into the leading bunch.

The master’s individual 45 to 49 series result hangs in the balance overnight as officials consider several appeals. Brent Marryatt was provisionally fourth across the line but was the first over 50 rider, cementing his series classification second place behind Jorg Engelbrecht of Team Thule Cycling.

Marryatt was well looked after by team mate Wayne Smyth who shepherded him to the front and then lead him out in the closing stages, sacrificing his own placing to get a result for Marryatt.

Ian Smallman (Team Thule Racing), didn’t start today’s race due to illness, but had an unassailable lead heading in the master’s 35 to 44 grade. Wellington’s David Rowlands (Armstrong Subaru) provisionally finished second today, behind Warmup Cycling’s Lee Johnstone, but was first in the 35 to 44 age group, a result that saw him move up to second in the series standings.

Armstrong Subaru won the masters Farington team time trial which saw them claim the team’s classification after being locked on equal points with Team Thule Cycling.

Sharlotte Lucas (Benchmark Homes) showed the form that recently saw her claim seventh on general classification in Australia’s National Road Series Tour of Canberra, outsprinting her team mate Elyse Fraser to win in three hours and 10 minutes, and claim the series title but only two points.

Lucas and Fraser broke away from the leading bunch with five kilometres of racing left, and made an agreement on the road to let the sprint decide the overall winner.