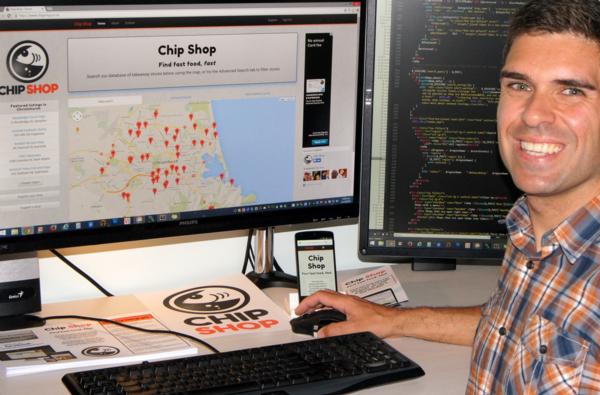 A Christchurch man who took a computer science course two years ago “out of interest” has seen the interest turn into a new business, with the launch of a new website.

Chip Shop founder Oliver Gibbs says what started as a life long interest developed into a new company over the space of about two years. “I’d always had an interest in computers and the internet, but coding and web development seemed hard to break into. From the outside it looks so complex, but once you get over the initial introduction it’s just like learning a new language. When you need to put something into code maybe you have to go and look it up the first couple of times, but after that it becomes second nature. Do that enough times and all of a sudden you realise that you’ve learnt a new programming language.

With a young family and a mortgage, “dropping out to pursue full time study wasn’t an option,” said Gibbs. Instead, he looked into what courses were available online. After taking a free online computer science course run by Harvard University in 2012, Gibbs says he tried a number of online learning providers until settling on Treehouse, a US based company which offers a range of programming courses for a flat monthly fee. “I started a bunch at once,” he says “especially courses related to app development for smartphones, as I thought that would be really cool. But it turned out I was naturally better at web development, maybe that comes from spending so much time on the internet!

After the web development course, Gibbs says he quickly realised the skill would need to be put to use, or be forgotten. “After I’d been studying about a year or so I was finding some basic stuff from early in the course was getting hard to come back to. Without having a use for the knowledge it was just getting forgotten, so I decided it was time to put it to use and started thinking about different kinds of web sites I’d like to build.

He eventually settled on the idea of a marketing tool for takeaway shop owners, after frustration trying to find a good fish and chip shop after the Canterbury earthquakes. “We moved a couple of times shortly after the quakes and each time finding a new local fish and chip shop always took a long time. I’d always look online to try and find something good, but it seemed like takeaway shop owners weren’t really bothering to get their business online at all. I guess they were relying on word of mouth or repeat customers, but I thought there should be a be a better way, so I created Chip Shop to help them easily create a website for their business and help new customers find their takeaway shop.

Gibbs says he expects the simplicity of the site to be the key to winning over takeaway shop owners. “Anyone who can use the internet can use Chip Shop to create a website for their takeaway shop. It’s no more complicated that filling in a few forms and - if you want - adding a few photos. The great thing about Chip Shop is that it takes whatever information you choose to enter and creates a great looking website that displays well on almost any device. So I hope by making it this easy, and with it being a free service, it should remove the barriers to people who may have previously seen having a website as being too difficult or expensive. All these websites will then be accessible and searchable on the front page of chipshop.co.nz, so it should become a great way for people to discover takeaway shops in their city that they may not have even known about.

As for the online study, Gibbs says he’s not finished with that either. “I don’t think I’ll ever run out of new things to learn now. There’s so many great resources online now that are free or really cheap, and I really can’t recommend enough to anyone who’s thinking they’d like to learn to code that they should jump right in. I think that getting started is the hardest part, but once you’ve had an introduction to it, if you’re hooked, the rest is easy.