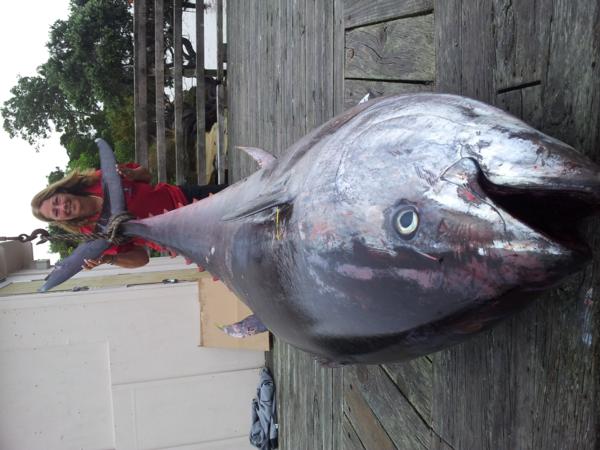 Donna Pascoe Of Fishing Pro Up For 'Ten Of The Best World Record Catches Of 2014' CREDIT: Beckie Wright

FishingPro is part of GladiatorMarine, a respected family business of 20 years’ standing, run by husband and wife team, Ken and Donna Pascoe. This year Donna has been chosen for the Anglers’ Choice Contest, in which people can vote once, every day during February.

The idea is simple. The IGFA have compiled a handful of what they consider to be the “best” world record catches of the past year. These catches were chosen based on criteria such as the difficulty of the species, the size of the fish, the tackle used, and the history associated with that particular record.
From there the international angling community, can vote on their favourite catches. The catch that wins the most votes by March 1, 2015 will receive the Angler’s Choice Award at the IGFA’s Angling Achievement Award ceremony on April 18, 2015.

Potentially voters can win hundreds of dollars of YETI products, by voicing their opinion on what they think is the best record catch of the past year and will automatically receive a free IGFAI-Membership by signing up at http://www.igfa.org/contests/AnglersChoice/. Voters can win by signing up online, and the more often they vote, the more they will increase their chances of winning each prize. IGFA members can sign in using their existing User ID and Password and non IGFA members can create an account with their name, email address and password.

The winner of the Angler’s Choice Contest, the record catch that receives the most votes, will be recognized at the 12th Annual Angling Achievement Award ceremony at the IGFA Headquarters on April 18, 2015. The winner will also be presented with a custom trophy from King Sailfish release mounts.
The total number of times each participant votes, will be equivalent to the number of entries they have for the prize drawings. For example, if a participant votes 15 times during the entire contest, their name will be entered 15 times into the pool of prize drawings. The weekly and grand prize winners will be selected, at random, from all registered voters at the time of each drawing. The winner of each drawing will be contacted via email and announced on the IGFA’s Facebook page.

For more information on FishingPro please visit their website at http://www.fishingpro.co.nz  and vote EVERY DAY during the month of Feburaryfor Donna!  Vote for the photo of the Pacific Bluefin Tuna from New Zealand.