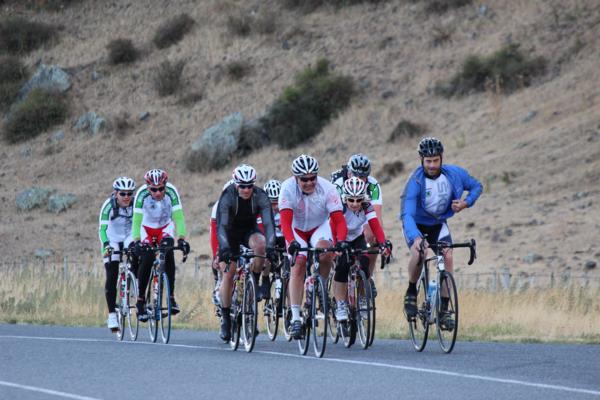 The iconic 100 kilometre Christchurch to Akaroa Coffee Culture Le Race will have its largest field since the 2011 earthquakes.

New owner Sheree Stevens from Not Just Events is ‘very happy’ about entry numbers that are tracking towards 770, exceeding the previous largest post-earthquake field of 734 cyclists that entered in 2013.

The event had 550 entries last year and has not had more than 800 riders since the regions earthquakes. Stevens was also pleased this year’s event - being held on Saturday 21 March -will start from Cathedral Square for the first time since the earthquakes.

“It’s been too long since the bells of Christchurch Cathedral have rung to signal the start of the event,” she said. “It’s a real boost in the arm for the central city and for the event,  that was a collective team effort that involved the Christchurch City Council, CERA and SCIRT.”

Stevens said the event has seen a good increase in team entries that showed ‘tackling the course as part of a three or two person team makes it really achievable.’

There will also be entertainment and timing splits at the teams change over points for the first time this year, something Stevens says will add some real value to the event’s atmosphere and acknowledge and record the efforts of those riding a section of the route as part of a team.

Christchurch Girls High School will provide music at the Millers Flat change over point and a band from the Christchurch School of Music will perform at Little River.

Event sponsors Coffee Culture and Miles Continental ŠKODA’ have both been active in leveraging their involvement. Coffee Culture are running their annual ‘Le Tour,’ a tour of their cafes in the region while Miles Continental have started a ŠKODA Cycle Wave club that provides those that sign up training and nutrition advice, regular training rides together and on race day they will start together in their own ŠKODA Cycle Wave in matching white and green ŠKODA kit.

Miles Continental General Manager Stephen Kelly has even ditched his mountain bike, buying a new road bike to get involved and support the event.

'We're all really excited about doing the event together,” he says referring to the wave. “For me as a sponsor it’s been a matter of putting my money where my mouth is and getting fully involved. I’ve enjoyed the training and getting out riding with other keen cyclists taking on the event. There’s no doubt it’s going to be a great day.”

Coffee Culture’s nine year association with Le Race is testament to their ongoing commitment to the local cycling community. “Cycling and coffee go together hand in hand so our involvement with Le Race is a natural fit for our stores and our guests”, Kristie Fogarty, Franchise Support – Operations and Training for Coffee Culture said. “We love to see everyone take on the challenge regardless of their fitness and it’s really rewarding to see the big smiles and feelings of achievement at the end.”

Stevens also pointed out that there is a great atmosphere around Le Race with its quirky links to the French elements in Akaroa. “We’re had French maids, French super heroes and even a French themed roster tackle the course, many of them in teams,” she said.

Le Race has a mixture of challenging hill climbs, fast flats and exhilarating downhills that travels from Christchurch, across an extinct volcano, to the French surrounds of Akaroa with many cyclists and their supporters choosing to stay overnight in Akaroa after participating in the event.