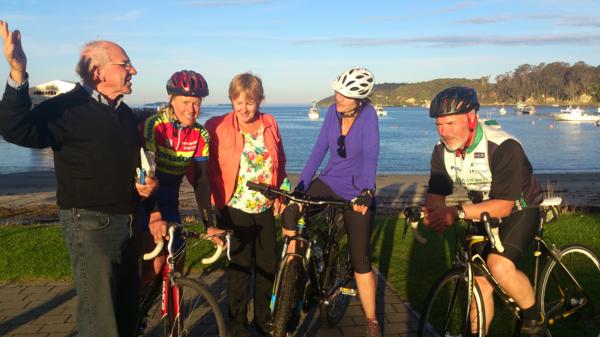 Stewart Island will create history when it hosts the opening 20 kilometre stage of the Tour of New Zealand on Friday the 10th of April.

It will be the first ever competitive cycle race held on the island which Tour Director Peter Yarrell says makes a unique event even more special.

“We’ve been really encouraged by the support shown from the locals on Stewart Island,” he said. A group of local Stewart Island riders will welcome riders from the Tour of New Zealand who will ride the 20 kilometre opening stage on the islands sealed roads around the township of Oban.

The main tour begins the following day simultaneously at Cape Reinga or Bluff finishing about 700 kilometres or eight days later at the Beehive in Wellington. Teams or individuals choose to begin at the top of the North Island or at the bottom of the South Island.

The island is renowned as an adventure playground for bird watchers, hikers, fishing-hunting and nature lovers, but cycling is not normally something associated with Stewart Island.

Yarrell says the locals can enjoy a ‘Tour de France’ moment, a first for the 400 full time residents.  Though sparsely populated in human terms, birds outnumber humans many times over, including an estimated 20,000 iconic brown kiwis on the island.

“Although riders on the South Island course will ride through the most scenic roads the South Island has to offer, the beauty and presence of Stewart Island just couldn’t be ignored,” he says.

Sitting within the Southland region, Stewart Island is just a 20 minute flight or 60 minute ferry ride south of the mainland, is the third largest island in the country (after the North and South islands.

Locals are excited to be hosting the South Island start to a national event with Stewart Island Promotion Association Promotions Officer Jo Learmonth saying its will also provide some good exposure for the area.

“Stewart Island is an outdoor adventure wonderland and so we are all excited about the opportunity to show case the diversity of our unique place and be involved in such a great charitable and fun event,” she said.

As the start gun fires in Stewart island, 1500 kilometres to the North at Cape Reinga, the tip of the North Island, competitors riding the Northern Island course of the Tour will be preparing for their 8 day cycling adventure.

Upon reaching New Zealand’s capital city Wellington on the final day of the tour, the Southern riders will meet Northern riders for a show down criterium race in the grounds of the New Zealand Parliament.

Held for the first time in 2012 this year’s third tour will host 70 riders from eight countries who will join 250 New Zealand riders taking part.