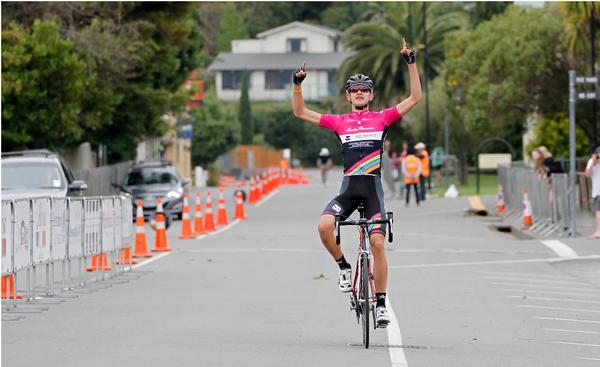 Keagan Girdlestone who was the youngest ever winner in the event's history last year, is keen to make it two in a row CREDIT: rickoshayphotos

Girdlestone, the youngest ever winner in the event’s history, knows he carries a bigger target on his back this year and is very aware it will be harder than last year to make it two wins in a row, but is still confident of backing up with another winning effort.

“I had a big year in the NRS (Australia’s National Road Series) last year where I was able to learn a whole lot more about racing from my teammates and staff at Charter Mason Giant Racing as well as from other riders in the peloton,” he said.

“I have gotten a lot more physically stronger over the past year so I am interested to see how I will feel in Saturday’s race.”

Girdlestone said his form is good after a busy start to the year where he competed well in two major Australian races, the Bay Crits where he held his own against a number of top professionals, and the Oceania Champs where he managed a silver in the junior men’s time trial and was fourth in the road race.

Riding for the NZ Road Youth Academy team Girdlestone was second in the opening round of the Calder Stewart Elite Series three weeks ago, claiming the leader’s jersey for the Under 23 classification.

Horgan is more of a time trial and rolling terrain specialist but has shown he can climb winning the event in 2012 and he made the podium two years ago.

Girdlestone said he thought there were a number of riders on the start line that have the potential to win,  pointing out his training partner Bull was an ‘underdog’ well worth keeping an eye on.

2013 women’s winner and last year’s runner up Sharlotte Lucas (Benchmark Homes) has been back training hard since recovering from a crash in late February’s Trust House women’s tour of New Zealand, saying she is probably at ‘80 percent’ in terms of form for Saturdays race.

Lucas, who had a recent confidence boast in the recreational event Ride the Rakaia where she was a dominant women’s winner after staying in the leading group of males, said she was ‘really looking forward’ to Le Race.

“It's  a pretty important race for me as the hard and hilly course suits me and it is one of the bigger races  in the region, “ she said. Lucas is focused on a podium finish providing everything goes well during the race; she has crashed, won and come second in the last three years.

The 100 kilometre event will have its largest field since the 2011 earthquakes with 780 entered, well exceeding last year’s 570.