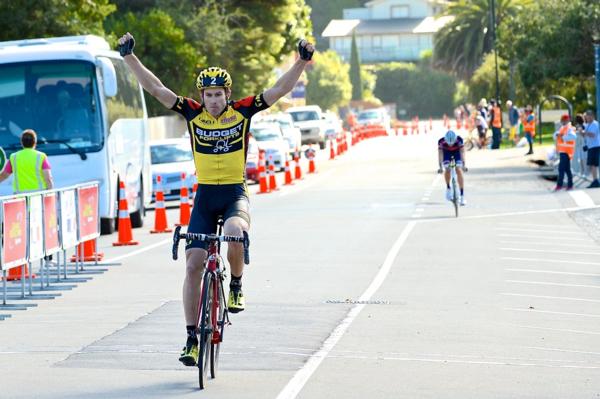 Barry (Budget Forklifts) was ‘absolutely stoked’ to grab what he called was an ‘unexpected’ win in the Christchurch to Akaroa 100 kilometre event after he manufactured the days’ key break as riders approached Little River after 25 kilometres of tough winds on the flat.

Tom Hubbard (Breads of Europe All About Plumbing) and Mathew Talbot (Thule) were the first riders to escape the leading bunch, getting away on the Summit Road after the day’s first climb up Dyers Pass.

Battling some strong winds on the flat section after Gebbies Pass that resulted in slower times, the two leaders were eventually caught as the leading bunch swelled to 25 riders with only seven kilometres left before Little River.

“The bunch had slowed up and everyone was just looking at each other,” Barry said. “So we took the opportunity to sneak away and got a little bit of a lead before the climb up Hill Top and then worked really hard together and managed to hold on to it.”

Lawson (TotalPOS Solutions) threw in an attack on the one of the final short steep climbs before the fast six kilometre descent into Akaroa, gaining a short lead that Barry managed to claw back just before turning off the Summit Road and heading downhill towards the finish.

The lead changed several times on the steep six kilometre decent before the two riders turned into the main street of Akaroa where Barry was first to open up his sprint crossing the line three seconds ahead of Lawson.

Defending champion Keagan Girdlestone missed the key break heading into Little River and had to settle for eleventh, finishing just over four minutes behind the winners.

Lucas, who has been recovering from a crash in late February’s Trust House women’s tour of New Zealand, was ‘really happy’ to win saying the race was made especially tough due to some strong winds at times.

“It was a really hard race,” she said. “The winds made it a tough day but I just rode my own race. I didn’t see any other women during the race so realised I was leading so just keep it going as hard as I could.”

Lucas appreciated some support from some of the male riders, singling out Richard Hayman who she said was ‘really helpful’ in the closing stages.

The Ross Bush Memorial Trophy - awarded to the first under 17 rider home - honours the Canterbury cycling icon and earthquake victim it is named after. It was won by 16 year old Kees Duyvesteyn (L & M Racing) who was sixteenth overall finishing in a time of two hours and 53 minutes.