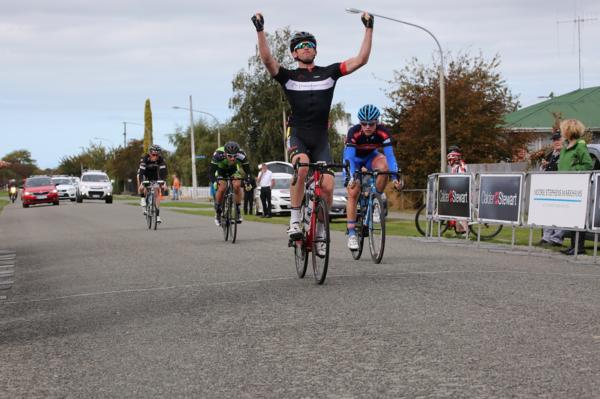 Sam Horgan out kicked his breakaway companions to win the second round of the elite race of the Calder Stewart Cycling Series in Pleasant Point near Timaru today. CREDIT: Mike Chappell

Sam Horgan out kicked his breakaway companions to win the second round of the elite race of the Calder Stewart Cycling Series, the Moore Stephens Markhams Classic, in Pleasant Point near Timaru today.

Horgan, riding for the Mike Greer Homes racing team, managed to get across to the 8 leaders well into the second lap of the 148 kilometre race to put himself in a position to win, while Justin Stott (Placemakers) got away with Matt Talbot (Team Thule Cycling) after two thirds of the 109 kilometre master races to win with home town girl Jeannie Blakemore (Vidasana Thule) claiming the line honours in the women’s race.

Racing was aggressive right from the start of the elite race featuring a number of failed breakaway attempts before one finally stuck after 50 kilometres of racing. Horgan missed it, but attacked the chasing bunch on a steep climb on the second lap with Liam Aitcheson (L & M Group Ricoh NZ), eventually finding help from his team mate Jason Allen to get across to the leaders.

“I had such good team support today,” Horgan said. “Jase (Allen) was right there at a key moment, helping me get in touch with the leaders, and once I did we all worked really well together to keep building a lead.”

Horgan was joined by Jason Christie (TotalPOS) and Aitcheson as they escaped on the day’s final climb up the short steep pitch of Gays Pass, just 17 kilometres from the finish.

“Once we got away we had no choice but to continue working well together all the way to the finish as the guys were chasing us hard, “ Horgan said. “There was no time for any games at the end.”

Tim Rush and his Breads of Europe team mate Luke McPherson managed to make contact with the three leaders with just over one kilometre remaining to the finish line, but it was Horgan who timed his sprint to perfection coming round Christie in the closing metres to win in three hours and thirty seven minutes.

“I had good legs today, timed my sprint well and got the result that was also a team effort,” Horgan said.

Stott, from Dunedin, was ‘really excited’ to win the overall masters race today in two hours and forty five minutes and move within striking distance of the masters 35 to 44 classification leaders jersey, held by his breakaway companion Talbot.

The two riders broke away with 30 kilometres to go after there had been several breakaways that were caught, including a six man effort mid-way through the race that contained Stott’s Placemakers teammates Michael White and Brendan Akeroyd.

“We got out of sight round a few corners and really committed,” Stott said. “Our team’s plan to have someone in all the breaks which we achieved, and once we got away we worked really well together and got a great result for the team, getting first, third and fourth, and won the days team’s classification.”

Masters 35 to 44 classification riders dominated the results with only Darrell Kircher (Christchurch Mitsubishi) and Paul Gough (Cycle World Masters) from the 45 to 49 classification making the top ten. Dunedin’s Geoff Keogh (Placemakers) finished twelfth to claim line honours for the over 50 age group, finishing just ahead of the over 50s series leader Brent Marryatt (Corsa Zona Rossa) and Craig Lange from the Dads Army team.

Women’s winner was Blakemore said it was ‘pretty awesome to finally get a bike race win’ in her home town after jumping on the wheel of Amy Brazier (Benchmark Homes) as she attacked after 59 kilometres.

“I was lucky to be in the right place at the right time,” she said. “Amy went and I followed and then we worked together to build and hold onto a good lead.”

Blakemore made her winning move on a short power climb with five kilometres left, holding on to win in three hours and 16 minutes with Brazier just over a minute behind followed by Mikayla Harvey (Back Magic Black) who won the bunch sprint to claim third, just under two minutes behind Brazier.

The next round is in Hokitika on Saturday 9 May.