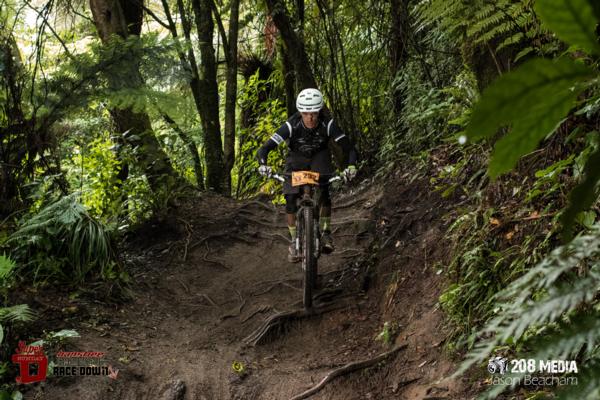 “Third time lucky eh?!” exclaimed women’s winner Janine Kavanagh as she took a hard fought victory in the inaugural running of the Banshee Super D over the weekend.

Having suffered from both injury and mechanical misfortune in other events this year, Kavanagh was finally able to see the fruits of her training taking a hard earned win over fellow Rotorua riders Katie O’Neill and Annika Smail

Despite heavy run in the days prior making the trails even more testing, nearly 150 riders turned out on a sunny autumn day to experience the latest offering to the MTB community. In a departure from the recent trend of “enduro” events the Banshee Super D reverted to a classic format, challenging riders with a long and physically challenging 7km course that would reward not only technical prowess and downhill speed; but also endurance.

With two runs being added for a combined time, the pressure remained on competitors. “It was a long and challenging run for everyone” said Kavanagh. “I almost didn’t have it in me to do a second run after the world of pain I was going to put myself through again. I’m pretty soft” she smiled. She found just enough however, to hold on as Annika Smail clocked the fastest women’s time on her final run. Not quite enough to make up for some small mistakes on her first.

The two run format continued to add to the drama as the men’s race came down to the wire. Following a stellar first run where he built a seemingly comfortable lead, eventual Men’s winner Carl Jones almost threw it away on the final run. Pushing the limits early in his run the suffered derailleur damage and in his haste to fix it almost ended his race.

“I tried to straighten it I snapped the backing plate right off. It wasn’t ideal as the chain was skipping round all over the place. I was still pushing hard so it was pretty stressful. I thought it was game over”

Eventually, at the end of his run Jones chain jammed, twisted, and everything but broke. He made it to the line with a slender 8 seconds to spare over a hard charging Louis Hamilton. It was close, but ultimately Jones XC fitness got him home

One of New Zealand’s top Elite DH riders, Hamilton enjoyed the challenge of a longer run. “In the second half of the track it did feel like I’d gone too hard at the start, which definitely made the track more challenging in spots.” Nor was he put off by the condition, adding that “Mud made it heaps more fun though!”

As a Downhiller used to 3 minute all or nothing efforts what did Hamilton really think of the effort? “The format of overall time worked sweet. Even though the run was longer and more physical than your average race stage it was a great challenge”. In fact Hamilton was buzzing. “The event was a good time. Everyone sharing a good vibe, on a good track, and some great music too”

Thoughts echoed by everyone in attendance. With the race HQ and “chill out zone” proved an awesome atmosphere for all competitors between runs the enthusiasm seemed infectious. Delighting event director Tim Farmer. “It’s so cool to see so many riders of different levels taking on the challenge. A lot of riders were in it just to race their mates, rather than contending for the overall, and I reckon that’s primo. If those guys can go away happy then we’re stoked”

With an overwhelming vote of confidence, and smiles everywhere; rest assured the Banshee Super D will be back

For full results go to http://ndurosuperd.com/results/