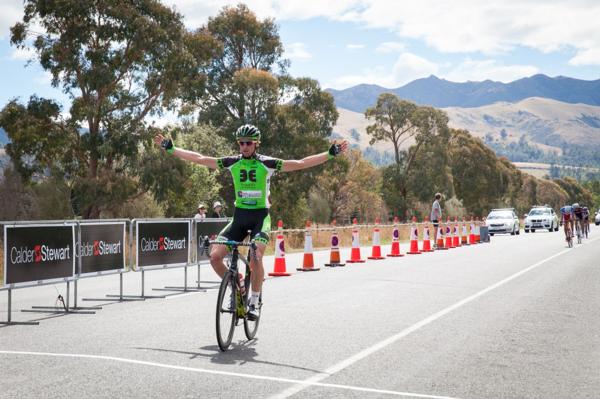 Tom Hubbard (Breads of Europe) is looking to repeat his Calder Stewart Cycling Series first round win to take the elite series lead in the third round the CYB Construction Hokitika Classic on Saturday. CREDIT: Rickoshay Photos

Round three of the Calder Stewart Cycling Series, the CYB Construction Hokitika Classic, features previous elite round winners Tom Hubbard, Sam Horgan challenging series leader Luke McPherson while racing is also tight at the top of the point’s tables in the masters and women’s events.

TotalPOS Solutions teammates Jason Christie, who was beaten into second place in a sprint finish by Horgan in the previous round near Timaru, and Richard Lawson along with New Zealand endurance track representative Pieter Bulling (Breads of Europe), Kees Duyvesteyn (L & M Group – RICOH) and Modus Construct’s Scott Thomas and Jake Marryatt should also feature in the elite men’s 140 kilometre race.

Horgan has strong support from his Mike Greer Homes team mates that includes Jason Allen, Daniel Barry and Adam Bull, who has had some strong recent results racing in Australia’s National Road Series.

The first appearance in this series of the young under 23 Cycling NZ Academy team is another feature of the elite men’s event that include three climbs up the tough Blue Spur climb where there are King and Queen of the Mountain points up for grabs.

Under 23 classification leader Keagan Girdlestone (NZ Youth Academy) is not starting on Saturday opening up the opportunity for Lawson, Liam Aitcheson (L & M Group – RICOH), Grayson Napier (Freshchoice Richmond/Pomeroys) and Duyvesteyn to stake a claim for the leaders jersey.

The Masters racing over three age group classifications once again provides the largest field with the strong Team Thule Cycling and Placemakers line-ups poised to go head to head in the battle for team and individual placings.

After a strong showing in round two masters 35 to 44 classification leader Matt Talbot (Team Thule Cycling) will have strong team support from West Coast local Brent Allnut, who lies second in the age group, as well as Scott McDonnell, Blair Stuthridge, Neil Sutherland and Ian Smallman.

After leading the 45 to 49 age group after the opening round, Placemakers Lee Johnstone returns to a course he won on last year after missing the second round due to injury.

Nelson’s Karen Fulton (Freshchoice Richmond) leads the women’s classification without winning a race yet,  something she win be looking to set right on Saturday. Last year’s women’s series winner Sharlotte Lucas, who grew up on the West Coast, will be keen to resume her winning ways on roads she knows well and will be supported by a strong looking Benchmark Homes team that includes Amy Brazier, who was second in the last round, Jeanette Gerrie and Julie Grant.

Under 23 leader Ione Johnstone will have good support from two teams of Black Magic Women’s racing that includes  Casandra Harvey, Michaela Kerr, Maddi Campbell, Georgia Vessey and former professional and multiple national championship winner on the road and track, Sophie Williamson, who is making her first elite race appearance after taking a break from cycling.

Jeanie Blackmore (Vidasana Thule) was an impressive winner of round two of the series and will have support from Frances Smith and Jennifer Haskell to push for the overall series lead.

The women’s field features a record nine teams and is a great mixture of youth and experience. The women and the master’s fields tackle a 110 kilometre course.