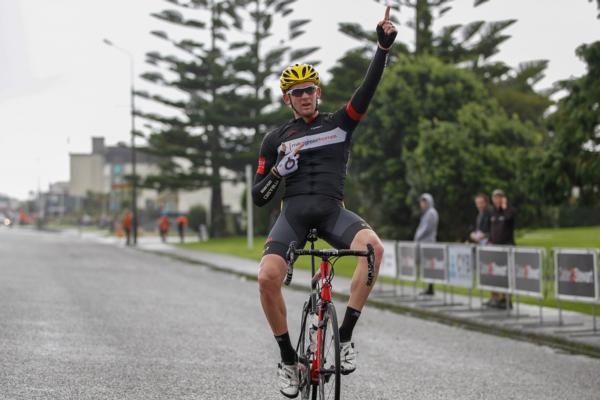 Sam Horgan soloed to an impressive elite win today in round three of the Calder Stewart Cycling Series, the CYB Construction Hokitika Classic, on the South Island’s West Coast, to also claim the elite series lead.

Horgan, riding for the Mike Greer Homes Racing team, attacked the leaders on the final climb of the Blur Spur Ridge taking L & M Group RICOH NZ’s Liam Aitcheson with him. Aitcheson fell off the pace Horgan, a strong time triallist, set on the final 12 kilometres, to be swallowed up by the chasing bunch.

Pace was high from the start in wet conditions with Hogan’s team mates Adam Bull and Jack Sowry and Cameron Karwowski (Freshchoice Richmond) getting away on the first lap of the 140 kilometre elite race to steadily build a lead that at one point was approaching three minutes.

The TotalPOS team went to the front and worked hard to bring the three leaders back which saw most of the field back together going into the final 55 kilometres of racing. There were a number of unsuccessful attacks that were shut down with the Mike Greer Homes team patrolling the front of the peloton.

“I was really happy to get the win today,” Horgan said. “It was wet and cold and quite testing conditions but I really like the course and the team was super strong all day.”

West Coast local Brent Allnut (Team Thule Cycling) won the masters race to also claim the series 35 to 44 age group series lead. Allnut attacked with 35 kilometres to go taking team mate Scott McDonnell and Justin Stott (Placemakers) with him. The three riders caught Kiwi Style’s Phil Patterson, who had been off the front with his team mate Glenn Ewans. Patterson was dropped after five kilometres with the remaining three riders working hard to maintain their lead over the closing stages of the 110 kilometre race.

Allnutt was first into the final corner and with 250 metres remaining held off Stott to win in two hours and forty two minutes with McDonnell coming home third.

Chris Harvey (Cycle World Masters) was the first over 50’s rider home, finishing nineteenth in the main bunch, 43 seconds behind Allnut, but it wasn’t quite enough to dislodge over 50’s series leader Brent Marryatt (Corsa Zona Rossa) who was the fourth over 50 rider to finish.

Hawkes Bay’s Amanda Jamieson won her first round of the series after a dominate display from her Black Magic team in the closing stages of the race which saw her team mates, former professional Sophie Williamson, take second with Michaela Drummond third.

“I was aiming for a podium result,” she said. “”So I’m happy to have achieved that and also pick up the under 19 (leaders) jersey.”

There were a number of attacks in the women’s race with some riders struggling to stay in touch but after the final climb of the day up the Blue Spur Ridge most of the field was back together. In a mature display of racing from the young Black Magic Team, they controlled the front of the race with Drummond leading out Jamieson in the final sprint.