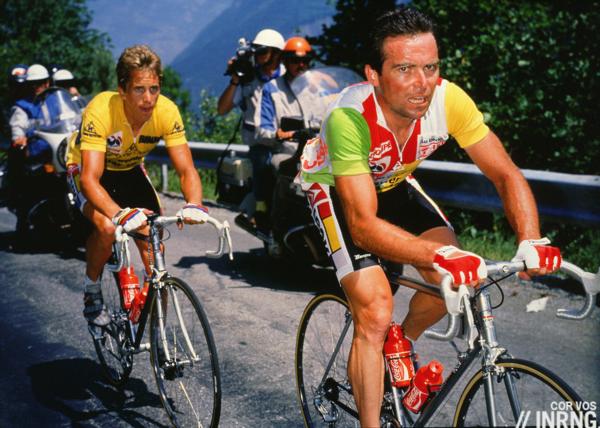 Cycling legends coming to New Zealand for the first time

The RICOH Legends of Cycling dinner on January 28 in Auckland next year will be the highest profile gathering of world famous cycling identities ever seen in New Zealand with organisers saying it will also be a celebration of all things cycling.

Featuring one of the greatest cyclists of all time American Greg LeMond, a three time Tour de France winner and two time world champion, the international voice of cycling Phil Liggett and New Zealand’s most successful professional cyclist Julian Dean, the RICOH legends of Cycling Dinner is being hosted by SKYCITY.

“It’s so exciting,” John McKenzie from the media & events company organising the event, enthuse says. “We feel very privileged to be able to bring some of the biggest names in cycling to New Zealand for a gala function. We have had such positive and encouraging support for the concept with some great sponsors on board that really share our passion and enthusiasm for the event; there’s no doubt it’s really going to be something very special and a real celebration of cycling.”

He had three fierce iconic battles at the Tour de France, two with his French teammate Bernard Hinault with one resulting in his first Tour win, and then in 1989 he overhauled France's Laurent Fignon on the final stage as he won the closest Tour in history by just eight seconds, a Tour moment Liggett still rates as his most memorable.

Less than a year after winning the first of his three Tours he nearly died in 1987 due to a hunting accident, losing two of the best years of his career to his recovery.

LeMond’s comeback from the accident also coincided with the dawn of the EPO era forcing him into early retirement in 1994 at the age of 33, becoming a vocal anti-doping advocate. The American’s post-racing career was until recently marred by an ongoing feud with Lance Armstrong after he questioned Armstrong’s relationship with Italian doctor Michele Ferrari in July 2001.

Last year LeMond joined Eurosport as a commentator for the channel's cycling coverage, providing analysis at Paris-Roubaix, the Giro d'Italia and the Tour de France, and hosts his own monthly programme LeMond of Cycling.

It will be his first trip to New Zealand, something he says he’s been waiting 25 years for. “I’m embarrassed that I haven’t been there earlier,” he says. “My only fear is that once I visit I will never want to leave. I am a fisherman, bike rider, pilot, skier and I love to surf. I think that in New Zealand I can do everything I love to do and I’ve heard the people are amazing.”

Liggett is the ‘voice’ of international cycling. The English commentator and journalist has covered more than 40 Tour’s and is a wealth of knowledge regarding the sport. Known for his vivid language as well as his encyclopaedic knowledge of the sport, Liggett is famous enough to have been impersonated by the late Robin Williams on the David Letterman Show. He has reported on 14 Olympic Games and 42 Tours generally alongside fellow veteran cycling commentator and former Tour de France cyclist Paul Sherwen. Liggett has also covered other sports including triathlons and ski jumping. Because of his varied assignments, he has worked for all of the American Big three networks, ABC, CBS, and NBC.

“I have only been to New Zealand on two occasions, and the last was for the Commonwealth Games in 1990 in Auckland,” Liggett says. “The Kiwi riders are now among the best in the World on the velodrome, and I am looking forward to returning for what I see as a very special visit and am very excited by the prospect of seeing New Zealand again. It is going to be a very special occasion and I am looking forward to meeting everyone, and the dinners and functions during my stay. “

Julian Dean is New Zealand’s most successful pro cyclist, retiring after 17 years which included riding in the Tour de France seven times. He is without peer as a Kiwi road cyclist, despite never receiving a Halberg Award nomination. He made the Tour de France podium three times in 2010 after crashing on stage two, being head-butted on stage 11 and getting tackled by a member of the gendarmerie before stage 16. Julian was shot by an air rifle in 2009 on stage 13 on his way to being the only rider to complete all three grand tours (Italy and Spain as well), cycling more than 10,000 kilometres in less than 70 days.

Dean finally secured a Tour de France stage win in 2011 in the team time trial and stood on the Champs-Elysees podium after winning the teams' classification. He last rode for UCI World Tour team Orica-GreenEDGE where he now works as an assistant sporting director and mentor. He won the 2007 and 2008 New Zealand National Road Race Championships and finished in the top 10 in the World Road Championships twice. At the peak of his career he was considered the best lead out rider in the world.

Dean says he thinks it’s special to be involved in an event that covers multiple generations of cycling, so is actually looking forward to hearing what LeMond and Liggett also cover as well as looking back over his own successful career.

Managing Director of RICOH Mike Pollok is a keen cyclist, who says he just loves the healthy cycling lifestyle and can’t wait to share the ‘most beautiful country in the world’ with two of the most well know and well respected names in the sport.

“Cycling in New Zealand hasn’t had anything like the RICOH legends of Cycling gala dinner,” Pollok says. “It really is the highest profile gathering of world famous cycling identities ever seen in New Zealand so was a great opportunity for RICOH to get involved in an event that we have no doubt will be successful and will create some great profile as well as celebrating what a fantastic sport it is with some of its biggest names.”

McKenzie says there are still limited opportunities for other sponsors to get involved in the event, stressing that New Zealand is a small country of just over four million people, but has a track record of punching above its weight on the sporting field leaving him in no doubt the RICOH Legends of Cycling dinner will be successful and sell out.

“It’s a unique opportunity to hear the stories, see the emotion and share the excitement as the legends take to the stage supported with impressive audio visual while guests dine on a sumptuous three course dinner. It will be an unforgettable night celebrating some true legends of world cycling and all that’s great about the sport.”