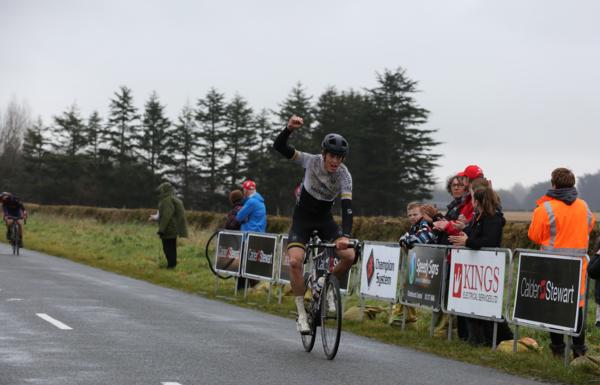 “I’m totally stoked to get the win’” Jones said. “The Modus boys all worked hard, sticking to our plan, so I was really well set up to go for the win which is definitely the biggest result I’ve had.”

Without any winds to challenge the riders the pace was high for the first half of racing with a number of attempts to get away closed down until a break of 12 riders that included four riders from the Modus Construct team, finally formed after 80 kilometres of racing.

The group, which also contained two riders from elite series leader Sam Horgan’s Mike Greer Homes team, worked well to steadily build a lead of just over one minute. With six teams represented in the break there wasn’t an organised chase which saw the leaders stay away to contest the closing kilometres of racing.

Scott Thomas (Modus Construct) and Josh Page (Mike Greer Homes) got away from the breakaway group on the last lap of the 26 kilometre circuit, allowing Jones to sit in. The two riders were caught with three kilometres to go which saw Jones launch his winning move taking Catterick with him.

Wellington’s Dave Rolands (Christchurch Mitsubishi) was an impressive overall winner of the 107 kilometre masters race, taking the win from Brendon Akeroyd (Placemakers), after the two riders broke clear on the first lap with two others who were quickly shelled.

Rolands and Akeroyd built a lead of one minute 30 seconds after the first lap that they increased to over three minutes after three laps, eventually crossing the line in two hours and thirty six minutes, two minutes and forty seconds clear of the chasing bunch.

It was Roland’s first race since crashing in Wellington’s Easter Tour that saw him separate his shoulder, so he said he was ‘very happy’ to have such a strong breakaway companion, and that although he won it was ‘definitely a two man effort.’

Series 35 to 44 series lead Brent Allnut (Team Thule Cycling) was fourth across the line, enough to retain his overall series lead while over 50’s leader Chris Harvey (Cycle World Masters) was sixteenth overall, just enough to secure a lead over Geoff Searle ((Corsa Zona Rossa), who was tenth but was the third over 50’s rider to finish coming in behind Jorg Engelbrecht and Stephen Woods.

The large women’s field was quite active with a number of attacks with Amy Hollamby (Cycleworld Fairweathers), Rhonda Hughes (Freshchoice Richmond Pomeroys), Makayla Smith (Avanti Plus) and Susan Van der Pol (Freshchoice Richmond Pomeroys) all prominent while Sophie Williamson (Black Magic Black) policed the bunch, working hard to shut down any attacks she wasn’t happy with.

After several splits in the women’s race it all came back together during the last lap, something Lucas said she was more than happy with. “I felt it was all going to come back together and was confident to back myself in a sprint,” she said. “I’m really happy to get my first win of this year’s series and look forward to building from here.”

Jamieson did enough to hold onto her series lead.

The next race in the series is the Kiwi Style Bike Trails Nelson Classic on Saturday 12 September.