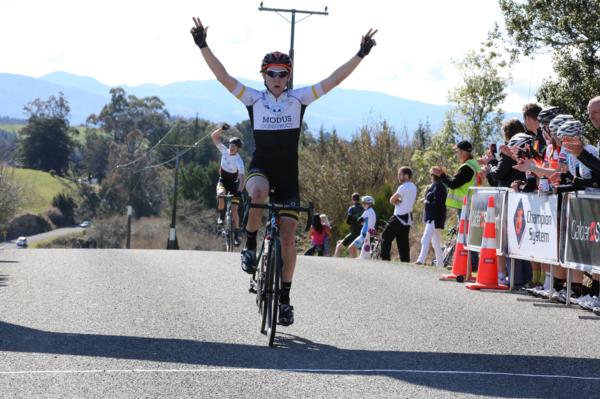 Dunedin’s Brad Evans backed up his favourites tag with a win in today’s fifth elite round of the Calder Stewart Cycling Series, the Kiwi Style Bike Trails Nelson Classic.

Held in the Upper Moutere region near Nelson, racing was aggressive and fast across the elite, masters and women’s racing with attacks and counter attacks featuring across the three competitions as riders battled for line and overall series honours with two rounds of the series remaining.

Evans said he was ‘pretty pleased’ to get a win on New Zealand soil after an Australian campaign that has seen him record three National Road Series wins and a series of top placings that has him currently lying ninth in the NRS individual standings.

“It’s my best ever year on a bike,” Evans said. “I’ve won two rounds in this series before so it’s pleasing to get another one and on a personal level it was nice to race a get a result with the young guys in our Modus Construct team. They rode well and did everything right to set us up for a good result.”

A break of formed right from the gun in the elite event that was only caught after 70 kilometres of the 138 kilometre race. There were then a number of efforts to escape the field that finally resulted in Breads of Europe’s Fraser Hewitt and Reon Nolan (TotalPOS Solutions) forming a break with just over 35 kilometres left of racing.

Driven by Mitchell Podmore the Modus Construct team formed on the front of the chasing peloton, taking responsibility for controlling the gap and reducing the distance to Hewitt and Nolan who had started to build a reasonable lead. As the elite field approached the key climb of Neudorf Hill Evans attacked taking his young team mate Max Jones with him.

With 13 kilometres left the two riders caught and pasted Hewitt and Nolan on the hill climb and then went into time trial mode to ‘smash it’ to the finish line where Evans outsprinted Jones on the uphill climb to win in three hours and 29 minutes, 35 seconds ahead of the chasing bunch that was lead home by Tom Hubbard (Bread of Europe). Jones second placed effort moved him into the series Under 23 leader’s jersey.

Hubbard was first of the chasers up the tough uphill kick to the finish line that would have seen him take the elite series overall lead off Sam Horgan (Mike Greer Homes Racing) but his result was relegated to the back of the pack due to coming off his line in the last 100 metres which forced Horgan off the road. The decision meant Horgan retained his elite series lead.

Wellington’s Dave Rowlands (Christchurch Mitsubishi) made it three wins from three starts in the 122 kilometre masters race, winning in three hours and two minutes despite having the company of four riders from the strong Placemakers team in the break that contested the finish.

The group worked together well to gradually build a lead that at one stage was over three minutes with the only hiccup being a mechanical that saw Allnut drop back to the main bunch, something that also saw him lose his series lead to Stott who finished second to Rowlands in a sprint to the line.

“The Placemakers boys were strong and were clearly focused on team points and setting up Justin for a result, so I was pretty happy to be able to cross first,” Rowlands said. “Once we got away we just put our heads down and rode hard on the rivet and then at the end it was every man for himself.”

Allnut lead the chasing bunch across the line to finish sixth overall, and crucially, was the sixth 35 to 44 age group rider to finish meaning he stays well within reach of the series jersey Stott will now wear in the final round next month in Canterbury.

Blair Stuthridge (Team Thule Cycling) was the tenth rider to finish, but was first in the 45 to 49 age group moving him up to third in the series. Darrell Kircher (Christchurch Mitsubishi) was thirty third across the line but seventh in the 45 to 49 age group, enough to still have a solid hold of that classification leader’s jersey heading into the final round.

Cycle World Master’s Chris Harvey strengthened his lead in the over 50s classification finishing eighth overall and first in that age group while second placed over 50’s rider Geoff Searle got caught behind fading riders over the closing 100 metres after an initial strong surge, losing valuable places and points.

It was an active women’s race with a number of riders trying to get away but being reeled back in with the Black Magic and Cycling NZ Academy teams especially prominent along with Lucas and Susan Van der Pol (Freshchoice Richmond Pomeroys).

Lucas, last year’s series winner who is lying second in this year’s series behind Black Magic’s Amanda Jamieson, punctured at the 82 kilometre mark but an efficient wheel change saw her get quickly get back up to the front.

As the riders tackled the last kilometre and jostled for positions Lucas looked in the best position to claim back to back series wins just losing ground to the fast finishing Gumbley over the last 50 metres. Jamieson finished fourth to retain her series lead in the Under 19 and senior women’s classifications.

Today’s results sets up an exciting final round with most of the individual classifications close enough to be decided at the Cycle Surgery St Martins Hell of the South that features a number of gravel sections, being held on Sunday October 11, in Canterbury's Selwyn District.