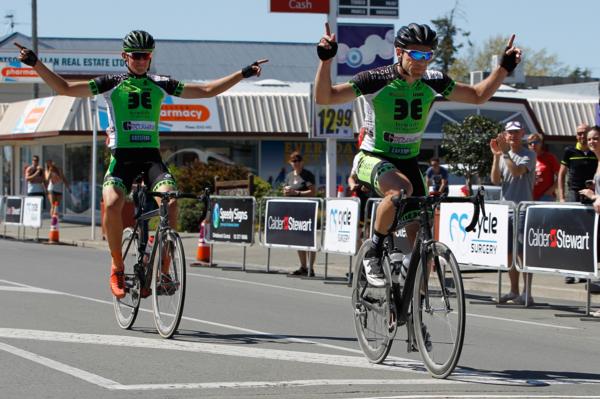 Breads of Europe’s Luke McPherson from Southland won the elite line honours while Christchurch rider Sam Horgan claimed his third Calder Stewart Cycling Series elite title in an exciting final round of racing in the iconic Cycle Surgery Hell of the South in Canterbury today.

Racing for Mike Greer Homes Racing elite series leader Sam Horgan from Christchurch beat his main contender for the overall elite series win Tom Hubbard (Breads of Europe) in the bunch sprint to take the series while McPherson rolled across the line ahead of breakaway companion and team mate Michael Vink, who made a strong return to racing after a year affected by illness, to win in three hours and thirty minutes.

Invercargill’s Mike White (Placemakers) won the master’s race that saw his team mate Justin Stott loose the 35 to 44 series title to Hokitka’s Brent Allnut (Team Thule Cycling) after both riders suffered punctures at different stages of the race which featured two sections of gravel the riders tackled a number of times.

Horgan was very satisfied to win the series for a third time, saying that although it was an individual win it was his ‘team that made it possible.’ “Our sponsor Mike Greer Homes and my team mates have all put a lot into the season and I have them to thank for the results,” he said.

Horgan now turns his attention to his major goal this year, the Melbourne to Warrnambool Cycling Classic next Saturday, where he will ride for his Australian Continental Pro team Budget Forklifts. Horgan won the event two years ago and made the podium last year in what is the second oldest one day cycling event in the world and the longest one day race in the Southern hemisphere.

McPherson made the most of being given some freedom by team caption Hubbard to record his biggest one day race result. “Tom gave me the ok to have a go to get up the road while he was trying to win the overall series,” he said. “It was a dusty hot day with a bit of wind thrown in the mix and we were tiring to be as aggressive as we could. I spent most of the day out in front with my team mate Michael Vink; we spent most of the last lap together and he very generously let me go over the line first so it was a very good day.”

Lucas was ‘very happy’ to be able to back up her series win last year, stressing it was much harder to get results this year as she was so heavily marked. “It really is great to be able to back it up as I really was watched closely this year so it’s been tough and I’ve had to race smart to get the series result.”

For forty four year old Fulton, who has won the overall series a number of times but had gone through this year’s racing without recording a win that saw her lying third of the women’s classification points table, it was a sense of relief to be able to finally raise her arms in triumph.

“I was really hungry for it today,” she said. “I’ve had some very good hard recent training and was very focused on getting a result; I wasn’t racing to come second today.”

A break of nine riders formed on the first lap of the 144 Kilometre elite men’s race that included Louis Brown and Brett Grieve from the NZ Road Youth Academy team, Breads of Europe team mates McPherson, Vink, Max Beckert and Fraser Hewett, Anthony Chapman (L & M Group – RICOH NZ) and Jason Allen and Jeremy Ingles from Mike Greer Homes. They were eventually joined by Horgan and his team mate Ben Johnstone and the leaders steady built a lead until Grieve and McPherson attacked after 80 kilometres of racing.

On the third lap of four on the circuit Grieve had a mechanical on the gravel and Vink made his move to bridge across from the chasers to McPherson and the two riders went to work to build and then retain their winning lead over the final 50 kilometres of racing.

A messy final bunch sprint contesting third in the women’s race behind Fulton and Eylse Fraser (Benchmark Homes) saw Black Magic’s Maddi Campbell misjudge her final effort to lead out Jamieson resulting in her coming across the line ahead of her teammate costing Jamison valuable points that would have seen her on equal points with Lucas but still lose the series title as Lucas finished ahead of her on the day.

Black Magic’s Sophie Pulford had an impressive ride getting away early and riding solo off the front for two laps with the race only coming together on the final lap. Fulton and Fraser rode strongly on the first section of gravel on the last lap to escape the bunch and then worked well together while Lucas and Jamieson stayed locked together in the chasing bunch.

Fulton wasn’t going to be denied, launching her sprint first and quickly gapping Fraser to record her first series win of the year, consolidating her third place in the series standings.

Stott punctured on the gravel at the end of the first lap and although he worked hard with Domigan who waited for his teammate, the pair never managed to re-join the leaders, eventually getting caught by a small chasing bunch on the last lap.

In the closing kilometres Allnutt punctured the gravel that saw McDonnell stop to offer assistance, leaving Akeroyd, White and Manson to battle out overall line honours with the two experienced Placemakers team mates slipping away from Manson as they entered the township of Leeston giving them time to enjoy the final run in to the finish line.

Allnutt recovered to finish in a vital fourth position to claim valuable points ahead of Stott who’s eighth place finish saw him lose the 35 to 44 classification overall series to Allnutt by only two points.

Finishing third overall Manson was the first 45 to 49 classification rider ahead of Garry Smith (Placemakers), who finished thirteen overall, and Darrell Kircher (Christchurch Mitsubishi) who came in sixteen but the result was enough to secure the series title as series classification contenders in the main bunch were happy to stay together and keep a close eye on each other.

Phil Scott (Dads Army) was the first over 50’s rider to finish, coming home in eleventh place, ahead of the over 50s classification series winner Chris Harvey (Cycle World Masters).