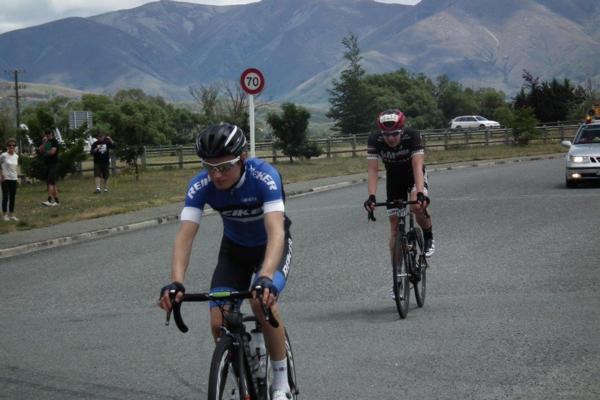 A satisfied Tim Rush rolls across the line ahead of Kees Duyvestyn to win the inaugural That Dam 108 kilometre Powerhouse road race CREDIT: Special Events Aoraki

Tim Rush proved the strongest in windy conditions to win the inaugural That Dam 108 kilometre Powerhouse road race on Saturday that included three hydro-dams in the Waitaki Valley in North Otago.

Riders had the benefit of a strong tailwind on the first half of the event that saw 17 year old Dunedin rider Kees Duyvestyn and Martin Smallman from Christchurch escape the leading bunch to establish a small lead.

Rush bridged across to the two leaders at the Aviemore Dam and the group worked well to gradually build its lead to over four minutes as they climbed the Otematata Saddle into a strong headwind on the return journey to Omarama.

Smallman dropped off as Rush pushed a hard tempo up the long climb out of Otematata with Duyvestyn doing all he could to stay in touch as the two riders pushed the pace to keep their advantage over the chasing bunch.

After a New Zealand winter riding and racing at altitude in Boulder, Colorado, in the United States followed by a solid result in last month’s SBS Tour of Southland where he rode in support of tour winner Brad Evans, Rush was clearly the stronger of the two riders which saw him roll comfortably across the line ahead of Duyvestyn to win in three hours and one minute.

“It was 45 kilometres of suffering on the way back but I’m stoked to be the first winner of That Dam Race,” Rush said. “We worked really well together, just two up into a block head wind trying to hold the gap. It was a really good effort, I know I’ll sleep well tonight and I’m sure we’ll see more riders coming back next year as it’s a great event.”

Marc Prutton and Cody McMaster were part of a small group that caught their Modus Construct Cycling team mate Smallman with 30 kilometres to go that started a battle for third with McMaster just getting clear of Prutton, Neil Sutherland, Smallman and Glen Gould in the last few kilometres.

Christchurch rider Mary Jones produced a strong effort to post the fastest women’s time in the road race crossing the line in three hours and 30 minutes 17 minutes ahead of Sue Lazar who finished nine minutes clear of Sarah Boys.

Thirteen year old Caitlin Titheridge from Ashburton was an impressive winner of the 30 kilometre Dynamo mountain bike event, winning in one hour and eighteen minutes, over fourteen minutes ahead of Tracey Jackson, recording the days fourth fastest time overall.

Dave Ralston won the men’s mountain bike event in one hour and eleven minutes, just over a minute ahead of Michael Clarkson.

Event Director Chris Thomas of Special Events Aoraki was very pleased with the first event, saying the feedback about the course from riders was great.

“We’re really looking forward to seeing the event get established as a real destination to come and ride and race a bike,” he said. “We’ve had fantastic community support and everyone who rode has already said they’re coming back and will bring friends with them; they loved riding round the lakes and over the dams, which is pretty unique.”

The event attracted riders from throughout the South Island and was a fund raiser for Omarama School.