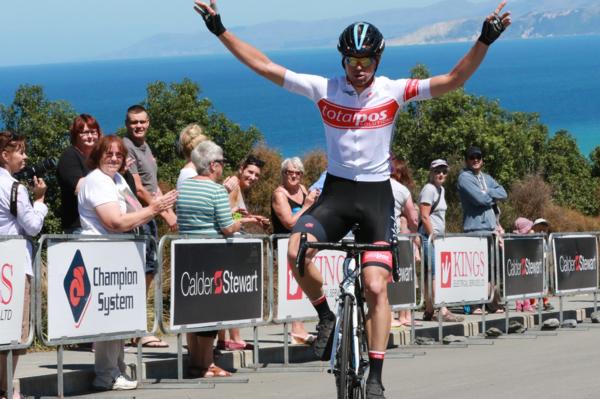 Tom Hubbard repeated his 2013 effort to win the elite race of the opening round of the Calder Stewart Series, the Kings Electrical Hanmer to Kaikoura Classic today. CREDIT: Mike Chappell

Tom Hubbard repeated his 2013 effort to win the elite race of the opening round of the Calder Stewart Series, the Kings Electrical Hanmer to Kaikoura Classic today.

Hubbard lived up to pre-race predications that he would be one of the riders capable of winning on the tough 123 kilometre course that featured over 1600 metres of climbing.

“I’m pretty happy to win again on this course,” Hubbard said. “It was a long hot day and our TotalPOS team did well to look after me and once I was in the break it was time to go to work and figure out how to win.”

Hubbard made the day’s key move getting away after 55 kilometres of racing with last year’s series winner Sam Horgan, his Mike Greer Homes team mate Tim Rush and Adam Bull and Jake Marryatt from the Modus Contruct team.

The five riders slowly built up a lead that at one stage was over four minutes. Being without team mates saw Hubbard look after himself saving what he could for the final stages of the race that saw Horgan make the first move with 14 kilometres left only to be caught by Hubbard. Marryatt was the first to crack as the pressure went on being dropping as Bull and Rush worked to successfully re-join the two leaders.

With three kilometres left Rush attacked and gained a lead of over 100 metres with only the short, steep climb to the finish line at Kaikoura’s Ocean Ridge Estate left. Hubbard buried himself on the tough climb to claw back the lost ground, passing Rush with only 40 metres left, winning in three hours and fourteen minutes.

Bull hung on to claim third and was the first Under 23 rider to finish so takes that leaders jersey into the next round in Timaru on 12 March while racing at the first time at this level, promising 16 year old Campbell Pithie was the first under 19 rider home.

Nelson’s Jeannie Kuhajek (Freshchoice Richmond Pomeroys) was ‘over the moon’ to win the women’s 94 kilometre race in two hours and fifty eight minutes. Kuhajek escaped the main field after 60 kilometres of racing being joined by Black Magic’s Michaela Drummond and Michaela Kerr.

After having a lead of over two minutes the chasing bunch had closed it down to only 40 seconds within sight of the finish line. “Once we hit the final hill climb I just lead up thinking it was just a matter of time before they came past me,” Kuhajek said. “But they didn’t so it was great to hold on and a take the win.”

“It was great to have this race back on the calendar,” Rowlands said. “It was hard in the headwind and really hot and I wasn’t really sure how the legs would feel so I’m pretty pleased to win.”

The three riders dropped Matt Talbot (Thule) after he punctured, working well together over the last 50 kilometres to build a lead of over four minutes.