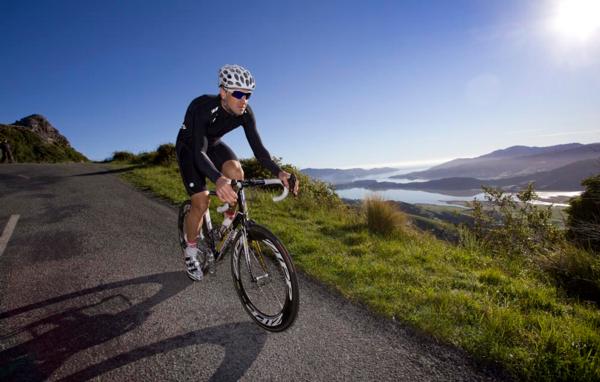 Double Olympic medallist Hayden Roulston will ride PlaceMakers Le Race for the first time with his focus still firmly fixed on forcing his way into the national track team for the Rio Olympics.

Roulston left his professional contract with Trek Factory Racing at the end of last year to focus on riding on the track at this year’s Olympics, something he says he is still “one hundred and ten percent focused on” after missing selection for this month’s UCI track world championships in London.

“I haven’t been in New Zealand at this time of the year since I turned pro so I’ve have never had the chance to do Le Race,” he said. “But I need some intensive road work to go alongside the track training I’m doing and I know Le Race is a really hard course, so it’s just what I need at the moment.”

Although disappointed to miss out on the world champs the 36 year old says his focus is still firmly on Rio, and is doing all he can to give himself every chance to make the endurance track squad.

“Everything has always been about Rio,” he said. “That hasn’t changed. I might not make the team but I don’t want to hang up the bike without having given it everything to try; I am giving myself the best chance to do it as I know with the right team we have a very good chance of doing very well in Rio.”

Roulston isn’t worried about a winning result in Le Race, saying he will ‘see what happens on the road on the day’ being more conscious of his need for a good, hard intensive training ride.

“I know the course well from training and it’s a bloody hard. It’s never ending and there’s several times you think the climbing’s over but there’s another one. I really just want a hard day out; the result will be whatever it will be.”

Recent winners of the men’s race Dan Barry, Keagan Gildlestone, Michael Vink and Sam Horgan are all missing opening the way for last year’s second placed Richard Lawson, local rider Tom Hubbard, who is currently lying second in the elite classification of the Calder Stewart Series and young guns Jake Marryatt, Max Jones and Campbell Pithie to have an impact.

A late entry who is sure to make his presence felt is last year’s Ross Bush Memorial Trophy winner, awarded to the first under 17 rider home, 17 year old Kees Duyvesteyn.

Hubbard is another rider looking for a tough race as he heads to Asia and then Europe to race next month through to June with Australian Continental team Data#3 Cisco Racing. Hubbard raced in last month’s Australia’s Herald Sun Tour that was won by current Tour de France Champion Chris Froome and the Cadel Evans Great Ocean Road Race that featured a number of WorldTour pro teams.

Experienced riders Paul Odlin, Anthony Chapman, Reon Nolan and Scott McDonnell could also feature in the 100 kilometre race that starts in Cathedral Square in Christchurch and finishes in Akaroa on Saturday.

Sharlotte Lucas leads the women’s entries with an impressive track record of two wins and a second in the last three years. Her main competition will come from Hannah Gumbley, Julia Grant and Jeannie Blakemore.

Lucas says she trains specifically hard for Le Race as its ‘such a hard and technical course.’ “I’m pretty happy to be going for my third win and I’m confident as I know the course suits me with the long climbs and descents but I’m also aware that lots can go wrong too.”

The event this year features a new 53 kilometre ‘petite’ distance for those not wanting to tackle the whole 100 kilometres. It has attracted more than 150 entries. Riders doing Le Race Petite will be briefed at the same time as the main event but will start just after the main field has left Cathedral Square in Christchurch.

The event provided a real boost to Christchurch’s rebuild when it was the first major sports event to return to the central city for its start in March this year, four years after the regions devastating earthquakes saw its start line relocated.

Le Race has a mixture of challenging hill climbs, fast flats and exhilarating downhills that travels from Christchurch, across an extinct volcano, to the French surrounds of Akaroa.

Riders also tackle the event on tandems, mountain bikes and in teams of two or three with prizes for also up for grabs for the King and Queen of the Mountains, the Ross Bush Memorial Trophy for the best under 16 rider and the Envormation Vintage Cup, where the winner is determined based on a combination of bike frame age and race time.