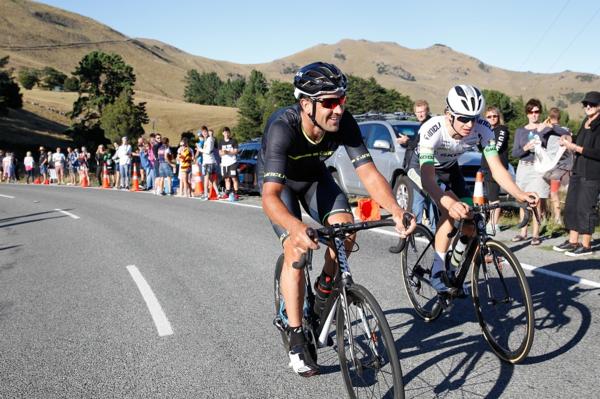 Double Olympic medallist Hayden Roulston and world champion Linda Villumsen both got the hard raining day they wanted that resulted in wins in today’s 100 kilometre PlaceMakers Le Race between Christchurch and Akaroa.

Roulston dominated the leading group of 12 riders that formed on the flat after the days first set of climbs through the Port Hills above Christchurch. He applied the pressure in the strong cross winds to reduce the group to six as they approached the day’s longest climb up to Hilltop where he again forced the pace with only Callum Gordon and Tom Hubbard able to stay with the former WorldTour professional with Hubbard dropping off the pace halfway up the climb.

“It was definitely a hard day out,” Roulston said. “I no longer have that 78 kgs of road racing weight, its 84 kilos of track legs now so it was a bit harder than I anticipated. The group was too big on the flat and not everyone was working so I started to ramp it up a bit as it had to be smaller. If everyone been working it would have been a different story.”

Roulston said he wanted to reduce the group again once on the Hill Top climb and once Hubbard was gone he went to work with Gordon to stay ahead of the chasers and stay upright in the challenging, windy conditions.

“Today was one of those winds that just catches your front wheel but I’m really happy to win, I haven’t won for a long time so it’s always nice to get the result. I wanted a hard day out and I definitely got that.”

Roulston is working hard to make the New Zealand track endurance team for the Rio Olympics, and entered Le Race for the first time intent of getting a “good, hard, intense training day”  stressing he was not focused on a winning result, but once the racing started it was obvious he was the strongest rider in the field.

Roulston and Gordon hit the finishing straight in Akaroa together with Roulston out sprinting the 21 year old Team Skoda rider to win in two hours and forty one minutes while Hubbard held on to get his best result in Le Race finishing just over two minutes behind.

Villumsen had two time Le Race women’s winner Sharlotte Lucas for company for most of the race, outsprinting her to claim the win in three hours and ten minutes, happy to get a tough day under her belt before she leaves to Europe next week to join her professional women's team United Healthcare.

“It was a really hard day,” she said. “Two girls riding along with a group of men, just looking at each other to see how it’s going. I definitely got what I needed today after a tough couple of months with my health, getting the win is a bonus.”

Villumsen hit the key climbs hard, wanting to stay near the front of her bunch, test her own fitness and “dig deep” that saw the two leaders clear out from the other women in the field early on to establish a lead of over ten minutes.

“I was really impressed by Sharlotte,” Villumsen said. “I wasn’t surprised to see her with me. I’ve raced her here in New Zealand and in Australia and she’s a real gutsy rider that definitely has a go in any race.”

Villumsen managed to get a small gap on Lucas on the technical fast decent into Akaroa, to cross the finish line five seconds ahead of Lucas with Christchurch rider Fiona Humpheson finishing third 12 minutes after Lucas.

The Ross Bush Memorial Trophy for the best under 16 rider was won by Jono Stewart from Christchurch while the new 53 kilometre ‘petite’ event was won by Andre Chappell in one hour and thirty nine minutes with Graeme Nutridge second.