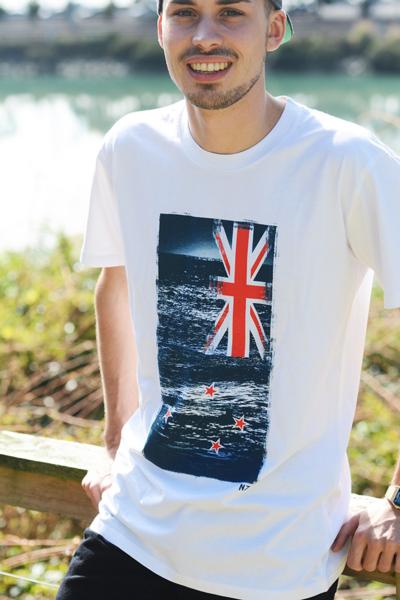 Over the last few months there has been some debate over the New Zealand flag and whether it should be changed. A new flag was suggested but in a referendum held recently it was rejected in favour of the old flag.

There seemed to be a ground swell to remove the Union Jack and thereby acknowledging New Zealand’s increasing self-awareness as a nation in its own right. At NZL store they asked their East 180 designers to tell a story about how they felt about their old/new national flag.

The outcome was thought provoking with subtle messages. There is an overarching sense that through our inability to change to a new flag that as a nation we’re still torn between the past and our future, remaining in transition and unclear. This state of mind is illustrated by the four stars of the Southern Cross shining out stronger than the faded back and distressed Union Jack. Alluding to an emerging, young country situated deep in the Southern Ocean that’s discovering its own identity alongside the fading influence of its past as a British colony.

Within the blue of the flag, there is creative reference to the ocean surrounding our island nation, our maritime history and the enduring and close relationship we have formed with it over generations.

The NZL store team have printed this flag design onto a simple white 100% cotton AS tee. So wear the old/new take on the New Zealand flag with pride and in a new and changing light.

NZL store offers an exclusive range of limited edition apparel, statement tees and accessories for travellers and locals looking for something new and surprising. Visitors are guaranteed to take away a keepsake that’s unique and which in some way defines their stay. NZL store also offers the perfect gift ideas for homesick Kiwis overseas.

To see the latest styles just in, please visit the website at http://www.nzlstore.co.nz .