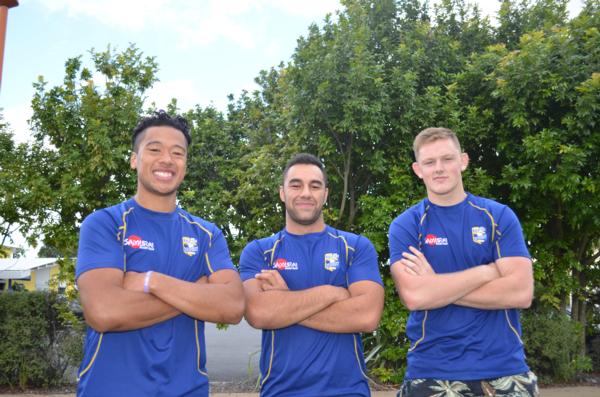 Tackling study and sport is all in a day’s work for Masiu Vainikolo, Brad Armstrong and Jessie Williams. Recipients of a joint scholarship from Bay Rugby and Waiariki Bay of Plenty Polytechnic, the trio of student-athletes are busy balancing full-time study with high performance rugby training.

“Being in the Bay Rugby academy gives us a chance to see where we can take our rugby professionally,” says Masiu. “If we can prove ourselves, the academy is our chance to progress and make a career out of it.”

“The academy is hugely improving our game,” adds Jessie. “It’s a big step up from high school rugby.”

As well as rugby, all three are studying the Bachelor of Sport and Recreation, which is adding to their knowledge about muscles, joints and exercise prescription.

“Through studying, we have a better understanding of our rugby exercise programmes,” says Jessie. “We know the why as well as the what.”

While all three are aiming to make a career out of professional rugby, they also have back-up plans. Both Jessie and Brad would like to teach, while Masiu will head for the NZ Police.

“The Police like you to have a few years’ life experience,” Masiu says. “Having the bachelor’s degree behind me will be really useful.”

The scholarship has a fine tradition of turning out rugby stars - previous recipients include Sam Cane and Tanerau Latimer. It means the students have their studies fully funded so they can gain their degrees without a large student debt.

“It’s a huge help to have your study funded,” says Brad. “It takes some of the pressure off.”

“Playing sport at this level requires a high degree of dedication and commitment, as does gaining a bachelor’s degree. This scholarship has been assisting players for eight years, enabling players like Jessie, Masiu and Brad to achieve both sporting and academic success, and setting them up for a future with a lot of choices.”

“Retaining and recruiting quality young people to our region is an important strategy as they make a significant contribution to our community not only through their sport but as future leaders in our community.”