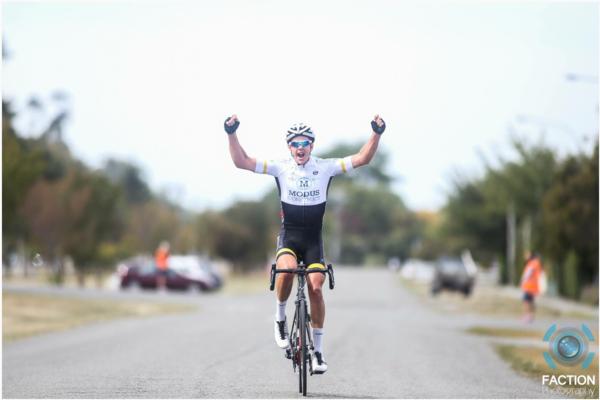 Ben Robertson of Christchurch was an impressive winner of round two of the elite race of the Calder Stewart Cycling Series, the Kiwi Style Bike Tours Timaru Classic, in Pleasant Point near Timaru in March. CREDIT: Chris Sexton. Faction photography

Team Skoda Racing’s first appearance in this year’s Calder Stewart Cycling Series adds spice to a strong field in the elite men’s race for round three, the Nelson Classic, on Saturday.

Led by Manawatu’s New Zealand Under 19 representative and national junior club champion Robert Stannard, the Skoda team has been performing well in Australia’s National Road Series with Stannard winning the last stage of the Great South Coast Tour on Sunday to finish ninth on general classification.

Elite men’s series leader Tim Rush (Mike Greer Homes), who has been in dominating form during the winter South Canterbury club racing season after winning the senior Club Nationals Road title in Alexandra in May, will be hunting for his first series win after a second and third placing sees him just three points in front of TotalPos’s Tom Hubbard.

Rush says he’s a little uncertain about his form for Saturday as it has been more than two months since he has raced a distance of over 100 kilometres, so is unsure about how his body will handle the longer distance but was looking forward to getting back into the series with his Mike Greer team, stressing they have a number of riders also capable of winning on Saturday, including the Under 23 series leader Ben Johnstone.

“From what I remember from the past few years racing this course, if a strong break gets away it's a long day trying to pull them back and with a few strong North Island boys coming down they won't want to muck around,” Rush said.

Hubbard has just completed racing in the Tour of Singkarak in Indonesia with his Continental pro team Data#3 where he had a number of top 10 finishes, including coming third on stage seven. “I'm really excited to be back racing with my Totalpos team mates,” he said. “It would be nice to get the victory for Totalpos as they have been a great sponsor for us. We have a couple of guys capable of winning the race on Saturday so we will be aiming for the top step.”

There will also be interest in how former elite national champion James Williamson (L & M Group – Ricoh NZ) and road professional Alex Frame (Mike Greer Homes), who missed out on going to the Rio Olympics as part of the national endurance track squad, perform on Saturday.

With a large number of riders competing in the Gran Fondo World Championships in Perth that start on the 1st of September, racing across the three masters age group classifications will be very competitive.

Former double winter and summer Olympian Chris Nicholson makes his first appearance in the masters racing after the forty nine year old has competed in the elite category in recent years after getting back on the bike after a heart attack in late 2013.

Nicholson, who competed in the 1992 Barcelona Olympics road race after speed skating in the Albertville winter Olympics that year as well, will be racing on very familiar roads with the local based Freshchoice Richmond Pomeroys Masters team that includes Dean Fulton and Warwick Spence.

Dave Rowlands (Christchurch Mitsubishi) has dominated the master’s racing in the series so far, winning the overall masters race in the first two rounds to hold a 14 point lead over Cycle World Red’s Carlos Lara in the masters 35 to 44 classification. Rowlands has proven himself to be the country’s leading master’s rider, winning the 40 to 44 age group at April’s National Club nationals with the fastest master’s time in the road race across all the age groups and last year won the elite grade in the Trust House North Island Series.

Champion System will again field a strong team with five of its six riders in the 35 to 44 classification which should see Scott McDonnell, who lies third two points behind Lara, well supported by Craig Domigan, John Randall, Mike Sleeman and newcomer to the series, Gisborne veteran triathlete and strong cyclist, Stephen Sheldrake, as they look to break Rowland’s stranglehold on the series.

The women’s race looks wide open with a number of the leading women away racing overseas. The experienced local rider Karen Fulton looms as one to watch, but is another to stress she is unsure about her form after having had a quiet winter racing locally.

“I have been training well the last couple of months but unsure of form really coming into this weekend,” she said. “It's a tough course, quite hilly with a gnarly finish so you definitely need to be fit. I’m a little unsure about the field as everyone is away, so just hope it’s positive racing.”

The elite men’s race is 124 kilometres while the masters and women tackle 105 kilometres.