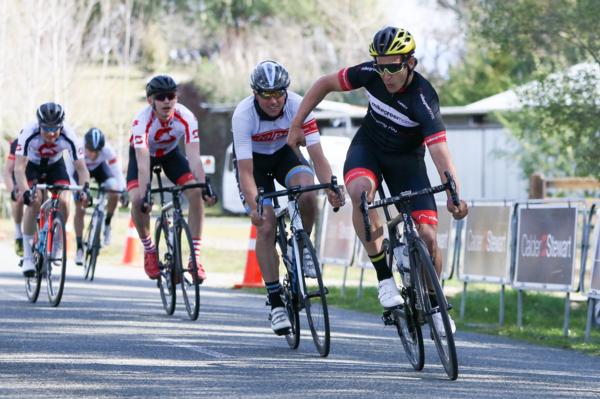 Alex Frame made a winning return to New Zealand racing after missing selection for the Rio Olympics, winning the elite race in the third round of the Calder Stewart Cycling Series, the Nelson Classic, today. CREDIT: rickoshayphotos

Alex Frame made a winning return to New Zealand racing after missing selection for the Rio Olympics, winning today’s elite race in the third round of the Calder Stewart Cycling Series, the Nelson Classic.

After missing the final cut to make the national endurance track squad for Rio Frame returned home from his European base, and riding for the Mike Greer Homes Cycling team Frame won a large bunch sprint ahead of Tom Hubbard (TotalPOS Solutions) and team mates Ben Johnstone and Tim Rush to win the 125 kilometre elite race in three hours and eight minutes.

“The Mike Greer boys just controlled it and we looked after ourselves,” Frame said. “We did everything we meant to, got the job done, rolled Tom (Hubbard) at the finish and Ben was third, so it was a good day.”

In some consolation for Hubbard, his second placing sees him take a narrow lead in the series over Rush while Johnstone consolidated his lead in the Under 23 classification. Chris Denholm from Team Skoda Racing made a strong first appearance in the series, coming home ninth which was enough to take the Under 19 series leaders jersey off Ethan Batt (PKF Cycling.)

Frame said he had no real expectations heading into today’s race, being more focused on getting a result for Johnstone, so was happy to sit in the bunch for the first half of the race and as the racing went on felt stronger and when the racing all came back together towards the end felt confident about winning the sprint.

“I came good near the end and felt sweet as everyone was getting a bit tired,” Frame said. “I just looked after myself at the finish trying to get Ben up for the win, so just followed everything and then Tom hit it so I followed him and looked back and Ben was gone so had to roll Tom for the win.”

Frame managed to win the sprint riding on a spare wheel with a 10 speed cassette running on his 11 speed set up after a mechanical, meaning his gears were slipping and he had to stay seated to sprint, making the result even more impressive.

Racing in the elite event saw numerous attempts to break the field up that saw Reon Nolan from TotalPOS marshalling his team well to protect their leader Rush before taking a flyer himself in the second half of the race that was eventually shut down.

In the final 10 kilometres a group of eight riders managed to build a small lead but it were caught in the final kilometres that featured a crash just before the finish line.

Johnstone’s team mate Mike Sleeman had got away after 30 kilometres of racing to ride the first half of the race solo, at one stage building to a lead of two minutes 40 seconds.

After the final climb over Neudorf Hill, with six kilometres left to race, the master’s race that features three age group classifications, all came back together with Rowlands the first to attack with 500 metres left. Johnstone jumped across and went past only to see the Wellington rider jump on his wheel and edge ahead on the line, to make it three wins from three starts in the series this year.

“It was a pretty tactical race today, quite slow early on,” Rowland’s said. “There were a lot of attempts to get away and they all got caught so it came down to big bunch sprint.”

Rowland’s added to his series lead in the 35 to 44 classification while Johnstone reinforced his dominance in the 45 to 49 age group while Dunedin’s Paul Gough (Cycle World Fluros) came home fourth, just ahead of  over 50’s series leader Blair Suthridge (Protocol Mackleys) to edge closer to the top of the over 50s points table.

Former double winter and summer Olympian Chris Nicholson, who was making his first appearance in the masters racing after competing in the elite category in recent years, was third overall and second behind Johnstone in the 44 to 49 age group.

The next round in the series is in Dunedin on Saturday 10 September.