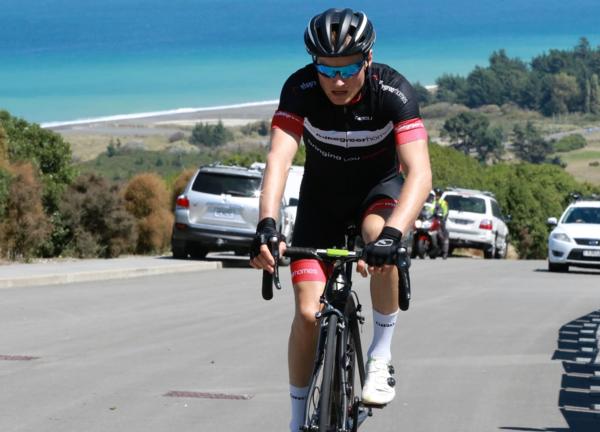 Tim Rush was second in the elite race in the opening round of the Calder Stewart Cycling Series, the Kings Electrical Hanmer to Kaikoura Classic, in February. Rush is hoping for his first win in the series on Saturday in the Armstrong Prestige Dunedin Cla CREDIT: Aerial & Sports Photography; Mike Chappell

North Otago cyclist Tim Rush is poised to claim back the elite men’s lead in the fourth round of the Calder Stewart Cycling Series, the Armstrong Prestige Dunedin Classic, as the series is hosted in Dunedin for the first time on Saturday.

Riding for the Mike Greer Homes cycling team Rush is only one point behind Christchurch based rider Tom Hubbard (TotalPOS Solutions) who will be missing from the start line on Saturday as he will be racing in China for his Data#3 Cisco Continental Pro team.

Also racing in China is the third round elite winner Alex Frame, who after missing the final cut to make the national endurance track squad for Rio returned home and riding in Mike Greer Homes colours won a large bunch sprint ahead of Hubbard and his team mates Ben Johnstone and Rush to win in Nelson three weeks ago.

Mike Greer Homes dominates the elite point standings with Rush, who lead the elite series before the Nelson race, holding a ten point lead in the individual classification over Sam Horgan while fourth placed Ben Johnstone also has a commanding 26 point lead over Modus Contruct’s Jake Marryatt in the Under 23 competition.

Rush has been in dominating form during the winter South Canterbury club racing season after winning the senior Club Nationals Road title in Alexandra in May and Saturday’s course looks likely to suit him as he’s still looking for his first series win after finishing second, third and fourth this year.

“It’s the first time there has been a round in Dunedin and they have given us a hell of a coarse,” Rush said. “Going around that circuit will be tough if the wind gets up like it can in Dunedin and then the climb up to Lee Stream will sort out who has any legs left.”

Rush said his team was looking for a strong showing hoping to build on its lead in the teams and Under 23 classifications while also reclaiming the elite leaders jersey.

Mike Greer Homes has some real firepower that should see Jason Allen lead the charge on the flat before handing over the climbing efforts to last year’s elite series individual winner Sam Horgan, with Rush and Johnstone saving all they can until the closing stages of the final 14 kilometre climb to the finish.

Modus Contruct team manager Marc Prutton said he had high expectations of Bull on Saturday, also stressing that the series was only half way through and that there were still ‘a lot of points to be won or loss’ this year, saying there was still a lot to race for.

“Max (Jones) hardly had any points then won the fourth round last year and went on to win the Under 23 jersey and finished fourth overall – the racing is far from over,” Prutton said.

Dave Rowlands (Christchurch Mitsubishi) is a marked man in the 109 kilometre masters race, only reinforced after a strong sixth placed showing in Perth in the Gran Fondo World Championships last week. The Wellington rider has an unbeaten record in the Calder Stewart masters series, finishing first overall in all three rounds this year and winning both his starts in last year’s series.

Rowlands, leading the 35 to 44 age group classification, only narrowly kept his unbeaten record just inching ahead of series 45 to 49 series leader Lee Johnstone (Champion System) to win in Nelson and how he handles the tough climb at the end of Saturdays racing with a number of strong climbers looking to break his dominance will be fascinating.

Last year’s women’s series winner Sharlotte Lucas (Benchmark Homes) will be hoping to get her first win of this year’s racing after missing the third round and battling illness. Lucas will have Jeannie Blackmore (Vidasana Thule), who won the 40 to 44 Gran Fondo World Championships women’s time trial title and backed up with a silver medal in the road race, and former elite triathlete Kate Mcllroy who has turned her attention to road racing, as her main threats on Saturday.

Mcllroy has racked up a number of good results road racing, including winning the final stage at Sam Miranda Tour of the King Valley in late August in Australia with the Specialized Women's Racing team.

After starting 2016 at the Santos Tour Down Under in Australia Lucas has battled some illness but performed well in Australia at the Tour of the King Valley riding in a support role for the Holden Women’s cycling team that delivered a tour win for Lisen Hockings.

“We had to do quite a lot of work to defend our lead at the Tour of the King Valley,” Lucas said. “But it was good to get hard racing but my form is nowhere near as good as what I’d want it to be as I seem to have been either sick or injured all winter which is disappointing but that’s sport.”

Michaela Kerr (Mike Greer Homes Womens Black) will have to work hard retain to her series lead in the senior and Under 19 classifications, but holding onto both jerseys after Saturdays race is possible.

Tactics across all three races on Saturday should see the strong larger riders better suited to the flat and cross winds trying to get away and build a lead before racing hits the 14 kilometre climb to the finish.