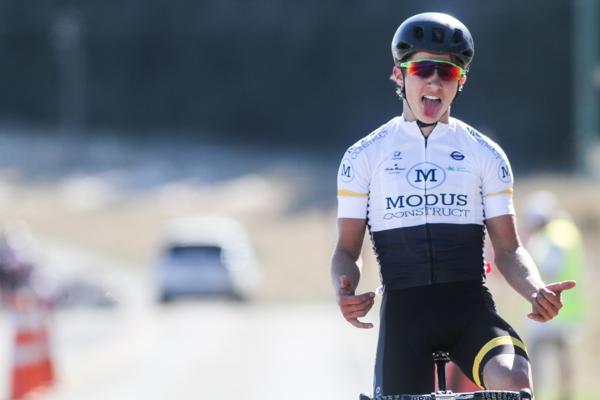 Adam Bull had the best climbing legs to win the elite men's race in the fourth round of the Calder Stewart Cycling Series, the Armstrong Prestige Dunedin Classic, riding away on the final climb to win in three hours and fifty three minutes. CREDIT: Chris Sexton Photograhy:

Adam Bull had the best climbing legs to win the elite men’s race in the fourth round of the Calder Stewart Cycling Series, the Armstrong Prestige Dunedin Classic, riding away on the final climb to win in three hours and fifty three minutes.

Bull (Modus Construct) cleared out from the leaders with five kilometres of the 14 kilometre final climb of the day up Lee Stream Valley left, finishing 20 seconds ahead of Jake Marryatt (Modus Construct) who held off Scott Thomas (TotalPOS Solutions) in the 135 kilometre elite men’s race to claim second.

Tim Rush (Mike Greer Homes) came home tenth which was enough to claim the elite series individual lead while his team mate Ben Johnstone was eleventh, consolidating his lead in the Under 23 classification.

“I was really happy with how I climbed today,” Bull said. “I’ve had a really good build up racing and training overseas so felt confident about the hill today. There were a few really good climbers in the race so I was pretty happy to be able to hold them all off.”

Wanaka’s Gavin Mason (Christchurch Mitsubishi) crossed the line ahead of the unbeaten masters 35 to 44 classification series leader, his team mate Dave Rowlands, to win the overall 105 kilometre masters race in two hours and fifty one minutes.

Mason rode a smart race, staying out of trouble and conserving energy for the final climb, only being pressured once after he had to get back in contact with the race after a puncture on the flat.

Last year’s women’s series winner Sharlotte Lucas (Benchmark Homes) got her first win of this year’s racing in dominant fashion riding away from the field on the final climb beating Jeannie Blackmore (Vidasana Thule) and Amy Hollamby (Cycleworld Fairweather ) to win in three hours and 17 minutes. It was especially satisfying for Lucas who has battled illness and injury this winter.

Michaela Kerr (Mike Greer Homes Womens Black) came home tenth to cling onto her series lead in the senior and Under 19 classifications, holding onto the senior lead by only one point.

“My team were so good on the flat, I didn’t have to do anything,” Lucas said. “I just hit the climb and knew what sort of power I could do for a 30 minute effort uphill and no one else was strong enough to come with me so I’m pretty happy.”

Reon Nolan (TotalPOS Solutions) got away early in the elite men’s race, and once caught there was a series of attacks that resulted in a group of eight riders, that included TOtalPOS Solution’s Joe Hutchinson and Jeffery Tuck, Max Beckert (Mike Greer Homes), Louis Brown (PKF Cycling) and Central Benchmarkers-Willbike’s Hyden Strong and Jordon Gilmour, getting away after 54 kilometres of racing.

Strong punctured leaving the remaining seven riders to try to build a lead before the final climb, but it proved unsuccessful with the break getting caught before the hill with 35 kilometres left to race.

Once on the climb the attacks were quick to come with Bull, Thomas, Marryatt and Cycling New Zealand’s Oscar Elworthy getting away with Bull making his winning move with five kilometres remaining, inching ahead to eventually ride the last three kilometres with a comfortable lead.

The Champion System and Christchurch Mitsubishi teams were dominant in the master’s race that features three age group classifications with very active, fast racing on the flat circuits of the Taieri plains that eventually saw a group of 10 riders get away after only 10 kilometres of racing.

The breakaway, that included Mason, and riders well suited to pushing the pace on the flat like Champion System’s Peter Murphy and Craig Domigan, Glenn Gould (Cycle World Red) and Placemakers Mike White and Brendan Acrkeoyd, worked well to build up a lead of over five minutes as they approached the final climb.

Domigan and Gould attacked the group before the climb but were caught with Mason, Scott McDonnell (Champion System) and Acrkeoyd breaking clear on the climb with McDonnell hitting it hard with nine kilometres left to climb to build a lead of 30 seconds only to get caught by Mason first, with just over two kilometres left, then Rowlands, in an impressive display of strength that saw him bridge across in the final kilometre.

Rowlands and Mason had a quick chat with the finish line in sight that saw Mason jump away with McDonnell unable to follow while Rowlands was happy to sit up to take second in the overall race and 35 to 44 age group classification to further consolidate his series lead over McDonnell.

Lee Johnstone (Champion System) added to his lead in the 45 to 49 series classification, finishing ninth, the first rider in his age group to finish while Blair Stuthridge (Protocol Mackleys) was the first over 50 rider to come home, finishing fifth, to build on his narrow over 50s series lead over Paul Gough (Cycle World Fluros).

“I just needed to conserve as much as I could while in the break as our team leader (Rowlands) was back in the bunch, then just needed to keep it together up the hill so I was pretty happy with the result,” Mason said.

The women’s race saw several breakaways on the flat with none of them sticking for long with the race all together heading into the final climb. Lucas and Blackmore quickly went to work to distance the rest of the field with Lucas eventually able to distance the gusty Blackmore in the last third of the climb.

The next race in the series is in Methven on Saturday 1 October..