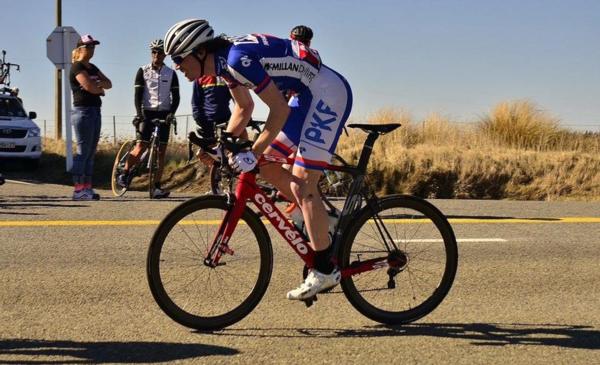 Ollie Jones looms as the favourite in the 100 kilometre inaugural Aoraki Mount Cook Classic Cycle Race, being held on the shores of Lake Pukaki this Sunday 9th of October. CREDIT: RickoShayphotos

Twenty year old Jones, who also made a mark as a triathlete, has represented New Zealand at elite level in in-line skating and in age group road cycling, has performed well in the elite men’s category of the Calder Stewart Cycling Series this year as he builds towards riding his first SBS Tour of Southland at the end of the month.

“I’m racing on Sunday to help get a few more miles in the legs before Southland,” he said. “I'm racing the Gorges Classic in Christchurch the day before the Mt Cook race, so I'll be backing up a couple of race days, but I’m looking forward to it and expect it to have beautiful scenery with good rolling hills.”

Jones said the course definitely looks like it could attract more top riders in the future as he sure the route, that takes in breath-taking scenery on an out and back course on the main Mount Cook Road alongside Lake Pukaki, is conducive to positive racing.

“It’s bound to great for all of the recreational riders and provides enough of a challenge for more serious cyclists to make for a great day out,” he said.

Being held in the Aoraki Mount Cook National Park with distances of 100 kilometres and a shorter 50 kilometres, the event has attracted over 150 riders from throughout the South Island, including a number of strong club and master’s cyclists.

The 100 kilometre event also features four cyclists who have competed in the Amateur Road World Championships in recent years, Stephen Mark, David Roche, Graeme Nuttridge and Sue Lazar, who won a bronze medal in the time trial in Perth in early September.

With stunning views of mountain, lake and glacial landscapes, Adrian Bailey, Managing Director of organisers Active QT, said the event is “quite possibly one of the world’s most scenic cycle races.”

“It’s such an amazing place to have a bike race,” he said. “The Aoraki Mount Cook National Park is one of the most beautiful places on earth so the opportunity to hold a cycle event there is very special.”

Active QT run a number of sporting events, including the Aoraki Mount Cook Marathon, being held on the previous day with over 900 runners. “The Marathon event was listed in Dutch Runner’s World Magazine as one of the world’s most beautiful road marathons,” Bailey said. “So the opportunity to run a cycle race as well seemed like a natural progression.”

Racing starts and finishes in Aoraki Mount Cook Village at the Hermitage Hotel with riders heading south along the Mount Cook Road to two turn around points, one for the 50 kilometre event and another for the longer 100 kilometre race.

“We have no doubt that it will be a very attractive event for cyclists from the North Island as well as the South Island and overseas as well, especially Australia, as it really is such a spectacular course.”