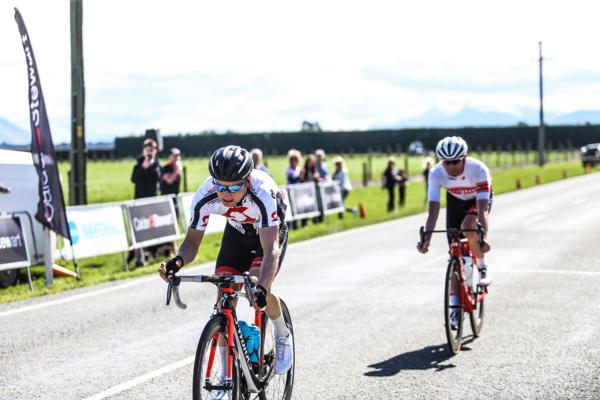 North Otago cyclist Tim Rush keen to back pay his team mates for their efforts that have him at the top of the elite men's standings of the Calder Stewart Cycling Series CREDIT: Chris Sexton Photography

North Otago cyclist Tim Rush is keen to back pay his team mates for their efforts that have him at the top of the elite men’s standings of the Calder Stewart Cycling Series heading into the series’ final round on Sunday, the Cycle Surgery Hell of the South, while women’s leader Sharlotte Lucas is posed to defend the series title she won last year.

The series finale, contested over elite men’s, women’s and masters events, features a number of gravel sections in Canterbury’s Selwyn District, south of Christchurch, that will have a major impact on the racing.

The elite field is the strongest the series has seen this year, featuring two experienced riders who have not raced in the event this year after being overseas, Olympic Track cyclist Dylan Kennett, who competed in the team pursuit and omnium in Rio is riding for JoyRide Apparel, and former national champion Michael Vink, who won the overall series in 2014 is lining up with Modus Construct.

Vink rode away from the field with Southlander Luke McPherson on this course last year with the pair combining well to finish more than seven minutes clear of the chasing bunch that was lead home by Jake Marryatt (Modus Contruct).

Many of the riders are looking for a good final hit out before the SBS Tour of Southland that starts next Sunday, with national track endurance squad member, Alex Frame, who won the Nelson round, TotalPOS Solutions team mates Richard Lawson and Reon Nolan, another former national champion who won this round in 2010 James Williamson (L & M Group Ricoh NZ), Max Jones (Modus Construct) and PKF Cycling team mates Ollie Jones and Brett Grieve all expected to feature.

“I really hope the wind is blowing to make it a hard gritty race,” Rush said. “My Mike Greer team mates have been doing a wind dance all week,” he said.  “As a team we are in a position that we can afford to throw everything at this race, and I’ll be more on domestic duties helping our power houses like Sam (Horgan), Ben (Johnstone) and Dan (Barry) make the top selection through the gravel sections.”

“I will try my best to pay back my team mates for what they have done for me over the series this year,” Rush said. Adding he is aware he knows that if Horgan was to win he has to finish in the top 14 to keep his series lead. “I’d just better make sure I’m not dropped,” he stressed.

Hayden Strong (Central Benchmakers Willbike) could take the Under 19 series title if he finishes in the top 15 on Sunday as he lies just one point behind Oscar Elsworthy (Cycling NZ) who is not racing.

Last year’s women’s series winner Lucas (Benchmark Homes) made it two wins in a row in the last round to take the series lead off Michaela Kerr (Mike Greer Homes Women Black) who holds an unbeatable lead in the Under 19 women’s classification.

“I’m looking forward to the race,” Lucas, who has a seven point lead over Kerr, said. “Depending on the state of the gravel and wind the course can be hard and you can also get held up with mechanical issues and punctures due to how hard the race can be on your bike. We have some good team tactics in place we hope will enable us to defend our lead.”

Experienced Nelson rider Karen Fulton (Freshchoice Richmond/Pomeroys) who is tied in third position with Amanda Jamieson (Mike Greer Homes Women Black), will have hopes she can repeat her win in this round last year which could see her finish as high as second on the points table if Kerr had a poor result.

Amy Hollamby (Cycle World Fairweathers) holds a healthy lead of 16 points in the over 35 age classification that should see her win that jersey for the series.

The overall master’s race is wide open with leading contenders Dave Rowlands (Christchurch Mitsubishi), who has the 35 to 44 age group classification already won, and 45 to 49 classification leader Lee Johnstone (Champion Systems) both missing from the start line.

Rowlands is currently competing in the Tour of Caledonia while Johnstone is recovering from crashing in the last round of the series. Tim Wilson (Armitage Wiliams) only needs to finish in the top eight in the 44 to 49 age group classification claim the 10 points he needs to take the series leader’s jersey off Johnstone.

Only two points separates Glenn Rewi (Christchurch Mitsubishi), currently lying second in the 35 to 44 age group and Scott McDonnell (Champion System) while Paul Gough needs to be the first over 50’s rider to finish on Sunday and hope leader Blair Stuthridge (Protocol Mackleys) finishes out of top 10 and points to take the series win.

The elite men will race 155 kilometres over four laps of the circuit near Leeston while the masters and women tackle three laps and 116 kilometres of racing.