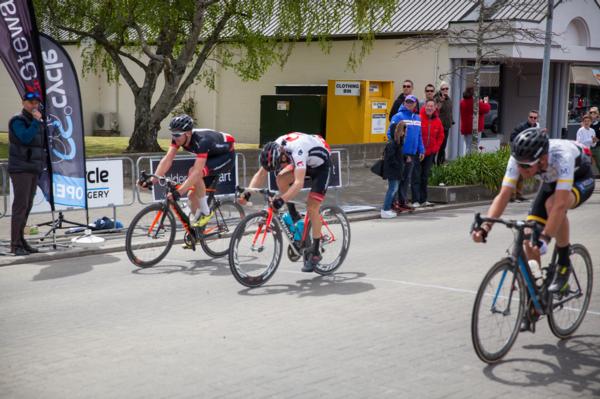 Michael Vink made a winning return to racing in New Zealand while Tim Rush and Sharlotte Lucas won the men’s and women’s overall Calder Stewart Cycling Series elite titles after a brutal day of racing in the final round of the series, the Cycle Surgery Hell of the South near Christchurch today.

“I’ve had good success in this race in the past, but it’s the first time I’ve won it in a sprint finish so it’s nice to know I’ve got that in my repertoire,” Vink, who has recently returned to New Zealand after racing most of the year in France, said.

“It was a case of staying fresh and not making any mistakes all day and saving energy and making your one bullet count, and that was it for me; just waiting, waiting and then at the end making it count, and it did so I was really happy to get the win.”

Under 19 series leader Michaela Kerr (Mike Greer Homes) just got past Lucas (Benchmark Homes) in the closing metres in a bunch sprint featuring eight women to win the 116 kilometre women’s race in three hours and twenty one minutes.

“With the cross winds our team was really strong so we put a lot of pressure on,” Kerr said. “It was a messy race, there was a break away for most of it so chasing that down was a bit of a struggle, but we all worked together well for the sprint and got a good lead out train and managed to pull off the win so really stoked with that.”

Yancey Arrington (Champion System) won his first masters race in the series beating Glenn Rewi (Christchurch Mitsubishi) in a sprint after the two riders had dropped Scott McDonnell (Champion System) on the final gravel section, less than two kilometres from the finish line, with McDonnell just staying clear of the fast finishing chasers to claim third.

“It was a really hard day and a bit of redemption for me because two years ago I broke my back at this race,” Arrington said. “So coming back and just being able to perform for the team, and get the team win and secure Scotties (McDonnell’s) third is just fantastic.”

The elite men’s race was aggressive right from the start with Hefin Price (Mike Greer Homes), Joe Hutchinson (TotalPOS Solutions) and Anthony Chapman (L & M Group Ricoh Racing) eventually escaping the main peloton to build a lead that at one stage was two minutes and 30 seconds as the race reached its halfway point.

The main peloton that contained all the series’ leaders was content to let the two groups of three riders work hard at the front of the race until a number of teams picked up the pace on the third lap that saw the two lead groups caught with about 60 kilometres still to race.

The pace intensified on the final lap with teams all trying to position their key riders at the front as the race hit the gravel sections that even saw Rush briefly off the front for a short time before the last section of gravel.

Rush, Horgan, Vink and Under 23 series leader Ben Johnstone (Mike Greer Homes) came out of the last section of gravel in the lead but Johnstone suffered a puncture, along with his team mate and favourite for line honours, Alex Frame, with just 1.6 kilometres left to race.

The elite men’s finish came down to a strong man’s effort in the last 300 metres as the three riders had ridden the rest of the field off their wheels across the gravel and then consolidated their lead on the tarmac before hitting the finish in Leeston, in the Selwyn District south of Christchurch, with Vink just edging ahead in the closing metres.

Rush finished the series with a 25 lead over Horgan to claim the elite men’s series title for 2016 while Johnstone won the series’ Under 23 title and Hayden Strong (Central Benchmakers Willbike) finished sixth to comfortably win the Under 19 series jersey.

“I gave it a nudge at the end, Mike (Vink) and Sam (Horgan) were super strong,” Rush said. “I couldn’t quite get round Vink but it’s good that he’s in our team next week for Southland. I’m just honoured to be in such a strong team, and for them to back me throughout the series I’m just so grateful and I owe them a lot.”

Women’s over 35 classification leader Amy Hollamby (Cycle World Fairweathers) made a strong showing getting away from the field on the first lap to build a lead that was at one stage over two minutes before she was eventually caught on the second lap of the three lap women’s race.

Nicole Shields (Mike Greer Homes) was prominent in the main bunch as it worked hard to reel Hollemby back in, and once she was caught Lucas and Karen Fulton (Freshchoice Richmond/Pomeroys) attacked and were quickly joined by Kerr as the three riders battled the side winds to try to build a lead.

Shields was again a feature as the race, that had seen a number of punctures to key riders including Lucas and her team mate Ella Harris, all came back together over the closing kilometres.

Fulton drove the font of the bunch hard across the final section of gravel that saw eight riders get a small gap as they approached Leeston. Lucas was first to start her sprint from 300 metres out while Kerr sat on the wheel on her team mate Amanda Jamieson, timing it well to overtake a tiring Lucas as they hit the line.

Lucas just stayed clear of Kerr in the point’s standings to win the senior women’s series for the third year in a row while Kerr and Hollemby were dominant winners of the Under 19 and over 35 series jerseys.

Manson played a policing role in the break, obviously more interested in looking after the interests of Rewi back in the main peloton, so did not really contribute to the effort that saw the riders get caught in the second half of the first lap.

The gravel and cross winds saw the master’s race split up into a number of groups with McDonnell, Arrington and Rewi getting away off the front before the last section of gravel on the second lap. With less than half of the race left, the three riders went to work to build what was to prove to be a winning lead.

Justin Sims worked hard with his Armitage Williams team mate Alex Nisbet and Paul Gough (Cycle World Fluros) to try to bridge across to the three leaders, getting very close but were just unable to close the final distance down, but they did build a lead of two minutes to the main peloton they held to the finish.

Arrington was driving the pace for team mate McDonnell who needed just three points to move ahead of Rewi into second place in the 35 to 39 age group classification standings, but the effort of the day in the break proved too much on the last section of gravel that saw McDonnell drop off the pace to leave Arrington and Rewi to battle for the win.

The 35 to 44 age group classification series leader Dave Rowlands (Christchurch Mitsubishi) and 45 to 49 leader Lee Johnstone (Champion Systems) were both missing from the start line. Rowlands is competing in the Tour of Caledonia while Johnstone is recovering from crashing in the last round of the series.

Blair Stuthridge (Protocol Mackleys) was eleventh, the second over 50 rider to finish, finishing behind Gough, enough to consolidate his over 50s series lead and claim the jersey for 2016.