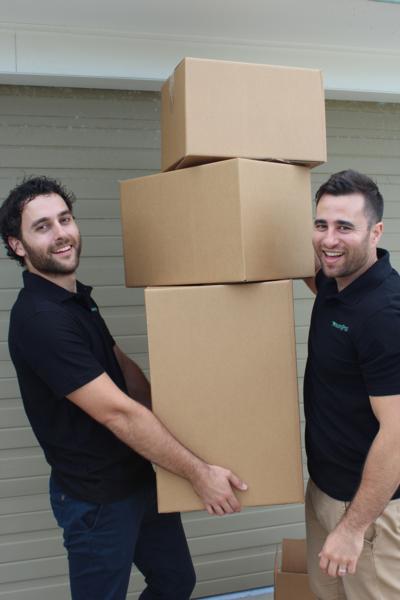 A new website that helps Kiwis with one of the “hassles” of modern life has passed a major milestone.

The website MovingPros, set up by two brothers, Cam and Nate Whitaker, aims to make the tedious task of moving house or office “far less stressful” at a point that really counts – sorting out and selecting a moving company.

“MovingPros is to moving what Trivago is to hotels, where it’s quick and easy to compare moving companies and find the one that fits your needs – and one you can entrust your belongings to," says co-founder Nate Whitaker.

“It’s gratifying that MovingPros has been well received by New Zealanders – since its launch in September this year, the website has handled more than 1000 moving requests across New Zealand,” he says.

“MovingPros is a very simple and user friendly website that asks you to enter your moving needs just once to receive quotes from as many as five professional movers.”

The brothers launched their website after swapping notes on their own unfortunate moving experiences.

“Finding a reliable moving company to help with my move was a painful process,” says Cam.

“I started ringing round countless movers to get quotes, half of which didn’t even answer the phone.

“When I finally got through they were either fully booked or I had to repeat my inventory over and over again. I found it to be so frustrating and time consuming I knew I had to do something about it.”

“I had a similar experience and the local moving company I selected also scratched furniture and damaged my iPad in the shift,” Nate adds.

All moving companies are vetted and quality checked before being accepted as members on the site so there are “no cowboys allowed.”

Nate Whitaker says this ensures that “we only connect customers with the most trusted moving companies with well-established track records – which provides peace of mind.”

He says that moving house or office is often seen as one of the top five most stressful life events for people.

“In fact one U.K. survey of 2000 people found that nearly 61 percent of those questioned placed moving at the top of their stress list (http://www.express.co.uk/news/uk/574171/Divorce-stressful-moving-home).

“Surprisingly, even relationship breakdown, divorce and starting a new job were all joint second.”

The survey also found that the stress of moving lasts more than three months.

Since its launch, MovingPros has added a total of nearly 100 moving companies to its listings.

“We have not only assisted Kiwis with their moving needs, we have helped trustworthy moving companies to book more jobs and receive the recognition and exposure that they deserve,” Nate says.

Anyone who’s faced with moving home or office or even just items like a bed or piano, is urged by the brothers to ‘compare before you book a mover’ – have a look at MovingPros and how simple the website is to use, and what it can do for you.