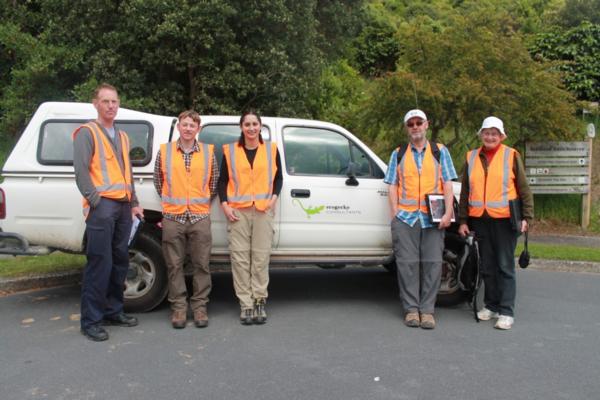 A first for Tawa community groups saw keen greenies, a consultancy firm and eager school children on their knees, searching for signs of life in Tawa's Redwood Bush.

Previous surveys had been instigated by Wellington City Council, but the council agreed to support the Tawa survey from the Our Living City fund.

The collective group laid three types of lizard surveying devices on the day. The two-hour trap laying session could help to measure the effectiveness of current pest control efforts.

Friends of Tawa Bush Reserves pest control volunteer Denis Rogerson, said lizards were an indicator species for the health of the reserve.

“If we find heaps of geckos and skinks we know the environment and ecosystem is healthy,” he said.

“The cool thing is that pest control has been going for 15 to 16 years and we have seen the increase in bird life because of this.”

Rogerson said that 10 years ago there were no Tui, [and] their return was primarily due to pest control.

EcoGecko Consultants, who specialise in herpetology (lizards and frogs) surveys across New Zealand, applied for the initial funding for the survey.

EcoGecko’s director of communication and administration, Asha Fernandez said that without volunteers, laying traps would be so much harder.

“Pitfall traps need to be dug into the ground.

Friends of Tawa Bush leaders have done a great job and so much more has been possible with them,” she said.

The other types of surveying equipment, laid 10 metres apart, involved attaching foam covers vertically to a tree and Onduline (a roofing material) acting as an artificial retreat, on top of the pitfall traps.

“The foam covers create a vertical tunnel that feels safe, that an arboreal (tree) lizard can get into from the top and bottom,” she said.

The pitfall traps and surveying equipment will be checked every day for a week in a minimum of three months’ time.

Any lizards found would be photographed, identified and released.

Fernandez said she was really happy with the day’s effort and 43 traps had been laid.

“I’m really happy, the kids have done an awesome job" she said.

St Francis Xavier school student Rachel Hewett, said the best thing about the day had been getting into nature.

“You normally don’t see lizards because they are camouflaged and when you put the traps in you will be able to see them,” she said.

Rachel's Dad and Friends of Tawa Bush Reserves volunteer, Damian Hewett, first witnessed EcoGecko in action as a parent helper on a Kapiti Coast field trip with his 9-year-old daughter.

He was instrumental in involving Friends of Tawa Bush Reserves in the Tawa survey.

“I put the idea to the committee and they jumped on board,” he said.

Mark Farrar, from the council's funding team, said council had supported the project with a $2000 grant.

“EcoGecko are delivering a great project, working closely with local groups including schools,” he said.

Farrar said the fund was about supporting local environmental projects in the community and many of these contributed to biodiversity.

Eight species now called Wellington home and historically, some of these were threatened.

“Our lizards have not been celebrated in the past but there is an increasing groundswell of support for them," she said.

She said there had been an awakening of people’s love for lizards.

“To protect them, we need to know where they are.”

Wellington City Council has contracted EcoGecko consultants to carry out lizard surveys across Wellington to understand more about them.

The collective work of EcoGecko and Friends of Tawa Bush Reserves are the next step for lizard conservation in Wellington.

“It is a step towards lizards getting the same recognition that our wonderful native birds have,” she said.

There has been a rapid survey undertaken at Wilf Mexted in the past, but no previous survey in Redwood Bush.