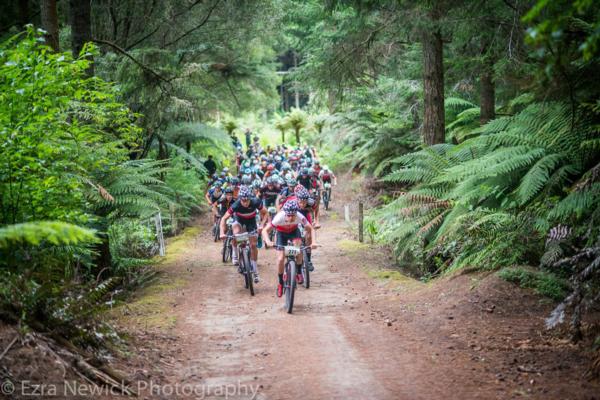 Expect a frantic start as riders kick of the 2017 season at the Camelbak Summer Cup CREDIT: Ezra Newick

Stars of MTB line up to battle on Arapuke Trails

The last time top level Mountainbike racing visited the Arapuke trails, rising Manawatu MTB star Gareth Cannon was still in primary school. But when the Camelbak Summer Cup rolls into town on Sunday the 20yr old Woodville local not only starts as the local favourite, but could end the day as the new number one on the NZ Crown national rankings.

It is a rare opportunity for Cannon to race a national level event on his home trails, and his intimate knowledge of the trails will see him start in a confident mood. The latest in an impressive list of talented XC performers to emerge from the Manawatu, there will be much interest in the performance of the former Tararua College student who was recently named in the NZ National MTB Performance Hub squad. Cannon won’t have it all his own way however, with stiff challenges expected from fellow Performance Hub member Taylor Johnston (Rotorua), and the experienced Ed Crossling (Wellington) consistently one of the fastest XC riders in the country.

The Camelbak Summer Cup is the North Islands most prestigious XC series, and the Manawatu MTB Club are delighted to partner with the series in its first move outside of Rotorua. The sold out event represents a real celebration of the hard work over recent years to develop world class trails in the Arapuke riding park, and a chance to showcase the facility to the rest of New Zealand. One of the best kept secrets in MTB, the formerly raw and technical trails of the area have morphed into sweeping flowing trails the envy of many nationwide. After Sunday that secret will be no more.

As intriguing as the Men’s race is shaping up, the Women’s could be even better.

Wellington’s Kim Hurst enjoyed a successful 2016 but the challengers are lining up. Home town favourite Fiona MacDermid may well be a few years retired but the former national series champion, like Cannon, has local knowledge and motivation on her side. U23 National Champion Amber Johnston (Rotorua) will launch her 2017 season in Palmerston North. But the most dangerous rider may well be one of the youngest.

Recognised as one of the brightest talents on the scene, 17yr old Auckland athlete Jessica Manchester has been the dominant junior female in NZ throughout the last two seasons. One of the “new wave” of XC riders with skills, speed, and determination to match; the Summer Cup presents a real chance for Manchester to mark her arrival amongst the Elite and Arapuke trails might just provide the venue.

Spectators are welcomed, with racing kicks off from 9:15 from the event HQ on Scotts Rd. Further details can be found at http://nduro.co.nz/our-events/summer-cup/

The series then takes a weekend off, before continuing in Tokoroa on Jan 22nd. Before the Rotorua finale on Waitangi weekend.