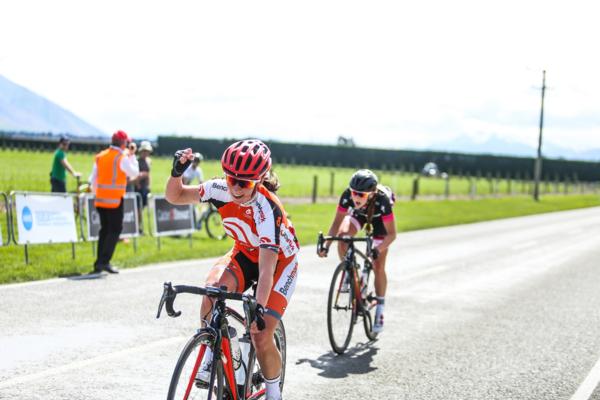 Record numbers and the return to racing of a former world champion are features of the opening round of year’s Calder Stewart Cycling Series, the Kings Electrical Classic, as it kicks off on Sunday in Cheviot in North Canterbury.

“We’re really excited by the numbers, strength and depth of the fields across the elite men’s, women’s and masters races,” Jake Rowse from the series’ organisers, Revolution Events, said. “A record of 12 teams have entered the elite race giving the event its largest field ever of 82 riders. We are also looking forward to opening this year’s series in Cheviot. It’s the first time we have bought the Calder Stewart Cycling Series to that area, and we’re doing it to support the community there that’s been hit hard by the earthquakes that has seen State Highway One close north of the town.”

Rowse said there were over 200 cyclists racing that included New Zealand’s top domestic based riders along with several who have not yet headed overseas to join their professional teams. Former World track Champion in the omnium Hayden Godfrey is making a return to racing having entered in the masters event and Rowse said the riders were all supported by team management and that these numbers when combined with all the personnel and officials working on the race meant there would be a lot of extra people in the town on Sunday.

“Cyclists all love their coffee so we expect the local café to be pretty busy,” Rowse said. “It’s nice to be able to support a community that’s been hit pretty hard in recent times. We also hope they’ll turn out to watch some of the best cyclists that are in New Zealand at the moment.”

Riders face a tough opening course that features a challenging climb out of Gore Bay with a fifteen percent gradient followed by two kilometres of undulations and a further climb of one kilometre. The elite men will tackle a 27 kilometre loop that starts and finishes in Cheviot five times to cover 135 kilometres while the masters will do four laps (108km) and the women will race three laps (82km).

“The course features climbs that are not long enough to suit true climbers, but are steep enough that they will punish sprinters legs,” Rowse said.  “It will suit tough riders who have the fitness to recover from multiple changes of pace and have a good team to protect them in the early stages. The course has never been raced on before, so it will be quite exciting to see how each race plays out.”

“I saw the last race of the Calder Stewart Series last year and really enjoyed watching the Champion System masters team in action and I thought I would like to be part of that again, plus I was getting fat,” Godfrey said.

“I still have reoccurring back issues but have learned to manage the issue enough to let me do some riding without to many issues, but I don’t have any expectations for this first event.”

Godfrey said he has only had a month of training but hopes it is enough to be able to finish in the main group. “I’m feeling stronger every day I head out and I'm sure the competitive nature will come back on race day and this first race sounds like it’s not the easiest so that will be a good challenge. The level of competition is very high in the master’s race.”

Auckland based professional James Oram, who is racing in the series for the first time for Team Skoda Racing, should feature prominently in the elite men’s race as he looks for a hard hit out before heading overseas to join his One Pro Cycling team.

“I'm normally already overseas racing by this time of year, but when Skoda mentioned the opportunity I jumped at it,” Oram said. “It’s always nice to keep the legs ticking over at a race and I expect the usual hard style of Kiwi racing that leads to a race of attrition, unless a team or two fully commit to controlling the race.”

Oram carries solid form into Sunday’s race after competing in the NZ Cycle Classic and Herald Sun Tour in Australia and says he thinks the course sounds good, with a bit of everything. “I can see the steep climbing helping form the race but not the ultimate decider,” he said. “Another feature is that the race is one hundred and forty kilometres, pushing the race time over three hours on New Zealand roads that will properly test everyone.”

Three time Calder Stewart Series women’s winner Sharlotte Lucas will line up on Sunday as the favourite alongside former NZ Sportswoman of the Year Kate McIlroy, but will face racing as an individual after signing with Australian team Roxsolt Attacquer who are not lining up for the first round.

“It will be a bit different not being part of the Benchmark team this year due to my Roxsolt commitments,” Lucas said. “The form is good and I’m racing the Rakaia race on Saturday before backing up for the Calder Stewart race they following day as the weekend is part of my preparation for the Oceania champs in March and the season beyond.”

Former mountain running champion McIlroy has tasted athletics success in the steeplechase, representing New Zealand at the 2006 Commonwealth Games before turning her attention to triathlon where she was 10th at the London Olympics and raced for New Zealand at the Glasgow Commonwealth Games before turning her back on the international triathlon circuit last year to join the Specialized Women's Racing team in Australia.

McIlroy, who will race for the Benchmark Homes team on Sunday as a guest rider, looms as a real threat after starting off the year with a third placing in the NZ Elite Women’s road race in Napier before racing in the women’s Tour Down Under and the Cadel Evans Great Ocean Road Race in Australia for her Specialized women’s team.

Rowlands will be heavily marked on Sunday but has proven more than capable of riding away from strong fields, and he has a strong Christchurch Mitsubishi team that includes  Wellington’s Brendan McGrath, last year’s 35 to 44 age group runner Glenn Rewi, 1991 Tour of Southland winner Stu Lowe and the very experienced Daryl Kircher.

Champion System have increased their firepower for this year, entering two teams the features the return to racing of Godfrey along with a number of well performed riders that incudes Lee Johnstone, Justin Stott, Scott McDonnell, Yancy Arrington and Paul Gough.