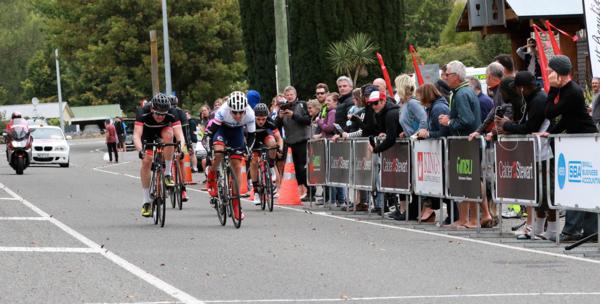 Brad Evans (middle) returns to racing in the Calder Stewart Cycling Series for the first time since his winning effort in the opening round in February. CREDIT: Mike Chappell

Racing on a tough 27 kilometre circuit that featured a race defining challenging climb out of Gore Bay the elite men covered 135 kilometres while the masters raced 108 kilometres and the women tackled 82 kilometres.

Wellington’s Dave Rowlands (Christchurch Mitsubishi) was the overall winner of the master’s race that contained three age groups, bridging across to the leaders in the second half of the race, and then holding off Yancey Arrington (Champion System), Warwick Spence (Freshchoice Richmond Pomeroys) and Placemakers Brent Allnut to win in two hours and fifty three minutes.

“It was super challenging for everyone in the race,” Evans said. “All the riders attacked it well and it was a super hard course as the race was changing every five minutes with guys going up the road and different guys coming back, it really was turned on its head.”

Evans paid tribute to his team, stressing a strong team was needed to tactically stay in touch saying he was “on the back foot a couple of times” but was lucky he still had enough team mates to put him back in contention for line honours.

“They all knew I was the fastest left at the end, so they were all attacking me but I just chased after everything and didn’t let them get to much leeway at all and then I just nailed the last sprint.”

Horgan and Evan’s team mate Ollie Jones attacked from the gun, eventually getting joined by Odlin, Matt Zenovich (Mike Greer Homes) and Brett Grieve (PKF Waterproofing Concepts). This group worked well together but were eventually caught halfway through the race, swelling the lead bunch to nine riders that included Evans.

The fourth lap saw Odlin and Marryatt make a move on the second climb that Horgan quickly covered. These three were joined on the final lap by Evans, Tim and Kris Rush, James Oram and Andrew King, with Oram, Kris Rush and King fading on the run in to the finish, leaving five riders to battle for line honours.

The shorter women’s race was aggressive with all the teams keen to have an early impact. The key move happened on the second lap when Harvey, Lucas, Mcllroy and Small Business Queen of the Mountain winner Deborah Paine caught and passed Sophie Pulford (Mike Greer Homes) who had escaped on the first lap.

The four women built a lead that at one point was two minutes, with Elyse Fraser from Benchmark Homes eventually making a solo effort to bridge across to the leaders on the final lap, hanging on the claim fourth, only 24 seconds behind the leaders and just seconds ahead of the fast closing chasing bunch.

“I’m extremely happy with the win,” Harvey said. “It was really positive racing and all the teams were being very competitive so it made for some awesome racing. Once we were away we worked really well together and then coming into the finish I managed to have a good sprint but Sharlotte almost sneaked up on me across the line so I was very happy to take the win.”

Nelson’s Jeannie Kuhajek (Freshchoice Richard Pomeroy) was the first women’s master to finish, claiming that jersey and Annamaire Lipp (Benchmark Homes) was ninth, enough to win the Under 19 leaders jersey.

Rowland’s team mate Glenn Rewi got away early in the masters race with Matt Talbot (Team Thule Racing) with the pair being eventually joined by Dunedin’s Blair Martin (Champion System), with the three rider’s starting the third lap with a two minute lead.

Seven riders that included Roland’s and his team mate Brendan McGrath attacked the climb, quickly distancing the main field, and then went to work to close the gap on the leaders, eventually catching them towards the end of the penultimate lap.

The leading group of 10 became seven on the final climb out of Gore Bay and then Roland’s applied the pressure five kilometres from the finish, riding off the front only to get reeled back in with less than two kilometres to go, but still had the strength to win the sprint.

“It all came back together with about a kilometre to go after I’d got away, but they didn’t counter attack so luckily I had about a couple of minutes to rest the legs and get in position to take the sprint,” Rowland’s said.

The winner of the 35 to 44 age group was Arrington while Chris Nicholson (Freshchoice Richard Pomeroy) won the 50 plus classification.