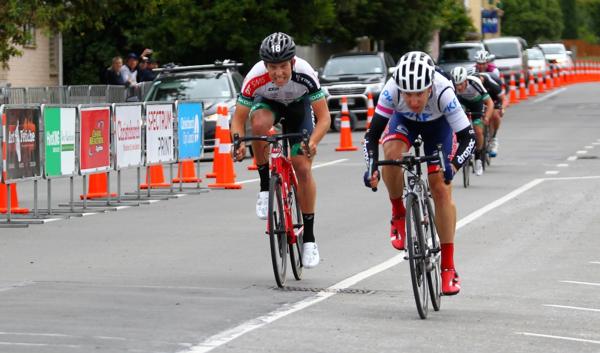 Evans rode a smart tactical race conserving energy at key points while part of a chasing bunch that eventually caught and passed the early breakaway of Christchurch riders Sam Horgan, who won the HireKing King of the Mountain competition, and Paul Odlin, with 30 kilometres left to race.

Lucas, who is preparing for a racing stint with her Australian team Roxsolt Attacquer in the United States and Europe during the New Zealand winter, had a tough battle with former mountain running world champion and triathlete champion McIlroy and former cross country runner turned cyclist, Tauranga’s Deborah Paine. Their efforts resulted in a record women’s winning time of two hours and fifty eight minutes for Lucas, beating Australian Josie Loane’s 2006 record by one minute.

Evans, who leaves for Thailand next week to race with his Australian Drapac Pat’s Veg Racing team, out sprinted junior world track champion Connor Brown from Team Skoda Racing after leading down the final descent, winning in two hours and forty one minutes.

“It really was a tactical affair today,” Evans said. “Our bunch kept dropping and adding riders and once we caught the leaders it really came down to the final descent. I’d had a look at it last week so that knowledge proved really helpful. That last descent was decisive. I just used my descending skills, didn’t take any risks and there was only a couple of guys left and it came down to a short final sprint, and I still had the power to take it.”

Lucas said both McIIroy and Paine both made the race very tough, but thought her local knowledge and experience of the key downhill sections made the difference.

“They (McIIroy and Paine) pushed me all the way. They were really strong so I pushed it on the downhills and that was the winning difference, just managing to get a small lead on the final descent.”

Christchurch cyclist Keagan Girdlestone had another milestone in his remarkable recovery from a near-death crash in Europe last year that continues to defy initial medical expectations, finishing the race in three hours, three years after he was the event’s youngest ever winner.

Odlin and Horgan escaped on the first climb of the day that went up through the burnt out areas at the top of Dyers Pass Road, a stark reminder of last month’s terrible fires in the Port Hills. They worked well together to build a lead that at one stage was over two minutes leading into Little River and the day’s key climb up to Hill Top.

Matt Zenovich jumped away from the chasing bunch and rode the climb hard closing to within 30 seconds of Odlin and Horgan as he crested the day’s second HireKing King of the Mountain, with the chasers following one minute and 20 seconds later.

Zenovich caught Odlin and Horgan but the three leaders were soon joined by a group of 12 riders that include all the pre-race favourites, except Jason Christie who had punctured early in the race.

North Otago’s Tim Rush attacked with twenty kilometres to go, building a small lead until he was reeled in one the days’ second last climb, 10 kilometres from the finish line. Horgan was another to suffer a puncture, so dropped from the leaders.

Ian Talbot featured in driving the bunch across the Summit Road high above Akaroa, and the young Christchurch high school student was looking strong but crashed on the second last corner of the downhill into Akaora. In shades of the Tour de France, where Chris Froome ran up Mt Ventoux, he picked up his bike to run across the finish line to claim tenth, still only 34 second behind Evans.

A strong showing from some of the country’s best young riders from Team Skoda Racing saw Chris Denholm finish third, current under 17 national time trial and individual pursuit champion Finn Fisher Black was seventh while Jack Compton finished ninth, resulting in the team having four riders in the top 10.

Last year’s winner, two time Olympic medallist Hayden Roulston, who has retired from pro racing, was happy to ride in the event for fun, but still finished near the front of the field, coming home seventeenth in two hours and forty nine minutes.

The three leading women stayed glued to each other’s wheels, settling in with the third bunch across the flats between the day’s two key climbs that contained a number of strong local male riders and Girdlestone.

“Deborah (Paine) was climbing really strongly so we all stayed together after dropping the other girls,” Lucas, who also won the HireKing Queen of the Mountain, said. “But once on the descents, especially the last one, I just smashed it down. It’s awesome to win Le Race three times as it’s so hard and it’s such a prestigious event.”

The Ross Bush Memorial Trophy for the best under 16 rider was won by Fisher Black while the 53 kilometre ‘petite’ men’s event was won by Lewis MacDonald while Henrietta Christie was the first female home, both finishing together in one hour and forty minutes.