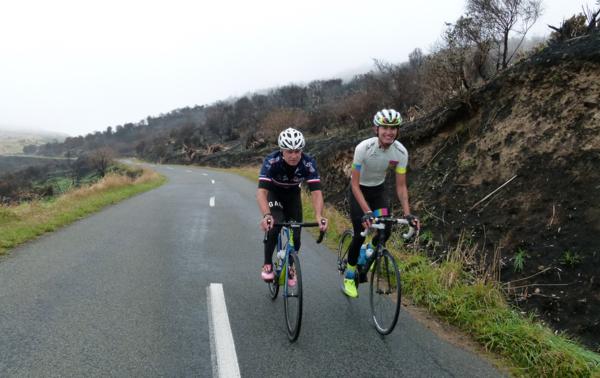 Christchurch cyclist Keagan Girdlestone (right) our training in the Port Hills above Christchurch with his father and coach Wayne, takes the next step on his cycling resurrection journey when he races in the second round of the Calder Stewart Cycling Series, the Armstrong Prestige Dunedin Classic, on Saturday. CREDIT: enthuse media & events

Christchurch cyclist Keagan Girdlestone will be on the start line in his first elite race since nearly dying after a horrific crash while racing in Italy last year when the second round of the Calder Stewart Cycling Series, the Armstrong Prestige Dunedin Classic, hits the southern city on Saturday.

Racing for the Moore Stephens Markhams Canterbury Development team Girdlestone can’t wait to race in the elite grade in the series after the South African born 19 year old, who went through the window of a team vehicle severing his carotid artery and jugular vein and sustaining bruising to the brain that also partially paralyzed his right arm, takes the next step on his cycling resurrection journey after riding in three mass participation events this year, exceeding all the initial medical expectations.

Girdlestone was initially thought to have died, then potentially was brain dead, then could have been wheelchair bound, and once movement came back he was told he wouldn’t ride a bike again, but once he did, it was still thought racing would not be possible.

“My recovery has really taken a massive upward trajectory, fully exceeding what everyone expected, and the pieces are really starting to fall into place,” he said. He rode the Christchurch to Akaroa 100 kilometre Le Race last Saturday, an event he won as a 16 year old in 2014, riding for the first time not needing to keep his heart rate under 145 beats per minute, finishing the gruelling event in a very respectable three hours.

“It felt really good being able to rev the engine after being on a heart rate restriction. I had pushed myself prior to Le Race but on Saturday I could really push myself and not worry about anything bad happening. This Saturday will force me to push myself the whole time, so I’m hoping it will see a rapid improvement in my performance.”

Girdlestone feels he has a second chance at life and has set his sights on still racing at the top level of the sport, so competing in the Calder Stewart Series is another vital step towards being able to be competitive in November’s SBS Tour of Southland and then looking at opportunities to race overseas.

Series leader’s jerseys are also up for grabs in the second round of the Calder Stewart Cycling Series, with round one elite winner, Dunedin’s Brad Evans, absent as he’s racing in Thailand with his Australian Drapac Pat’s Veg Racing team, leaving last year’s elite series winner North Otago’s Tim Rush the best positioned to take the series lead.

Manawatu’s Alex West (Team Skoda Racing presented by David Smith Surveying) looms as the favourite for line honours on Saturday after an impressive win in the North Island’s Gentle Annie event two weeks ago on a course that featured more climbing than the elite riders will face this Saturday as they tackle a 30 kilometre circuit four times on the Taieri Plans before climbing 14 kilometres up Lee Stream Valley to complete 134 kilometres.

West beat another promising young Manawatu cyclist Robert Stannard, who rides for Australian Under 23 development continental team Orica-Scott, in a sprint finish after the two riders had blown the race apart, finishing well ahead of a strong field that included some of the country’s strongest domestic based riders.

Canterbury University student Ian Talbot (Joyride Cycle Surgery), also looms as a real threat on this course that suits the strong climbers if they’ve survived the flat circuits where the winds can have an impact.

Christchurch rider and former series elite winner Sam Horgan says that although he lies second in the elite points standings he is not the Mike Greer Homes team leader on Saturday, stressing he has “no ambitions of winning the race or the series this year,” saying his team has two very good options in Rush and Southlander Matt Zenovich who are both in excellent form.

“The hilltop climb is incredibly tough and it will definitely be a strong climber who does well on Saturday,” Horgan said. “But if the wind blows on the Berwick Block, like we all know it can, then it could be a much reduced peloton that hits the bottom of it.”

Women’s series leader Mikayla Harvey from the Mike Greer Homes Black team is looking forward to defending her lead and racing on the course for the first time. “I’ve had a couple of weeks off after racing in Australia at the Oceania Champs, so it’s good to be back into racing,” she said. “My climbing’s been going well and it’s improved which is good as I know its going to come down to who’s the strongest on the final climb of the day on Saturday.”

Harvey said the two women’s Mike Greer Homes teams planned to make the racing hard on the flat circuits the masters and women do three times to “put pressure on the other teams and make them burn some matches before the climb.”

Lucas, who is on loan to the Cycle Surgery team from her Australian team Roxsolt Attacquer is building to race in the United States and Europe during the New Zealand winter. McIlroy is also on loan from her Australian Specialized Racing women’s team.

Under 19 series leader Annamarie Lipp, Ellesse Andrews (FAST Cycling Team) and new comer to the Calder Stewart Series, individual rider Jojo Bauer, the sister of New Zealand WorldTour professional rider Jack Bauer, are other riders that may have an impact.

Bauer was fourth in Le Race, finishing just over three minutes behind McIlroy who was beaten by Paine and Lucas, who set a new course record in winning the event for the third time.

Wellington’s Dave Rowlands (Christchurch Mitsubishi) is getting pretty used to racing with a large target on his back as he continues to dominate master’s age group racing in New Zealand. He was the overall winner of the master’s race in the opening round of the series that contained three age groups, and remains unbeaten in this series in recent years, except for when he let his team mate, Wanaka’s Gavin Mason, win on this course last year.

Yancy Arrington (Champion System Blue) is leading the 35 to 44 age group category and is in good form finishing second in the masters age group in Le Race. Arrington’s team mate, Dunedin’s Blair Martin, is a strong climber while Champion System Yellow will be looking to local rider Justin Stott for a good result.

Placemakers have a strong team with Brent Allnut, Luke McPherson, Brendan Ackroyd and Michael White all capable of having an impact on the race while  Freshchoice Richmond Pomeroys will be looking to defend Chris Nicholson’s lead in the over 50 category as well as improving Warrick Spence’s second place position in the 45 to 49 classification.

Another rider to watch will be Mike Crawford from Christchurch who is making his first appearance in the series for the Armitage Williams Blue team.  He was last year’s Five Passes Tour winner and is a very strong climber who last rode in the series in the elite race in 2012.

The masters and the women race over 109 kilometres. Racing gets underway on Saturday at Outrum Rugby Club starting at 10am.