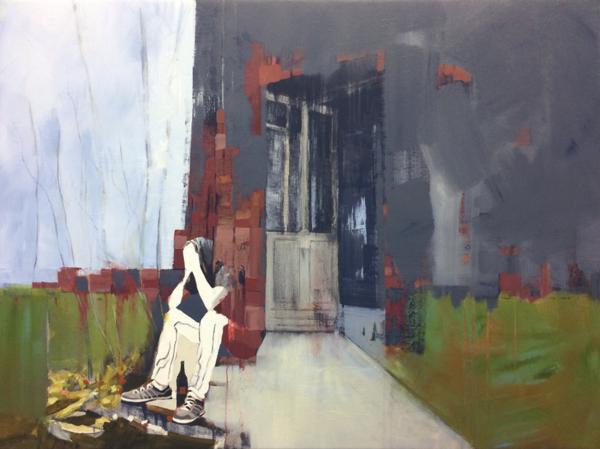 The mere passage of time makes us all exiles

The effects of migration, gentrification and alienation are explored in Lisa Chandler's latest exhibition "Passage' now showing at RED Art Gallery in Nelson, New Zealand. From migrant workers in Singapore, to the older generation being forced out of traditional hútòngs in Beijing, and gentrification displacing the working class in Leipzig.

The themes of urban spaces and places, and the impact of globalisation on city inhabitants have reoccurred in Chandler’s art practice since she completed her Master of Fine Arts in 2012. As a traveller Chandler’s work is inspired and influenced by global cities such as London, Singapore and Beijing.

Transitioning through urban spaces, such as airports and subways on a regular basis, Chandler is intrigued by the generic space of passageways, and the act of moving through somewhere, both as an anonymous individual, and as part of the chaotic crowd. Passageways, doorways and building structures feature in her paintings, offering a metaphor for looking into the future or back into the past.

In 2016, after a four-month artist residency at the Leipzig International Art Programme, she uprooted her life in Nelson and shifted to Leipzig, Germany. Her new transitory lifestyle has highlighted the increasing nature of exile in contemporary society. It is now commonplace for people to shift countries, some by choice, as in Chandler’s case, but for many others it is by necessity or by force, and for them it can be a difficult and challenging experience.

Solitary and anonymous figures inhabit her paintings, partially obscured but yet present. In ‘Maid 1780’ the maid is numbered rather than named, her face painted out – highlighting the invisibility of hard-working migrants.  In ‘The Mall’ and ‘The MRT’ solitary figures are dwarfed by vast urban spaces. And in ‘Passage’ a young man sits on a step outside an open door – has he just come out or is he about to go in?

For Chandler responding to her environment is important, however equally as important is the process of painting. In each painting she strives to find a balance between the image and the materiality of paint, between figuration and abstraction, she says “in each painting it’s a constant struggle to find that balance – I am always painting in detail and then partly destroying it to find that sweet spot”.

Chandler has a MFA (Hons) from Whitecliffe College of Arts and Design, Auckland, New Zealand. She presented her thesis paper ‘Negotiating the Non-Place’ at the Affective Landscapes Conference at the University of Derby, England in 2012.

Recent international art projects include: ‘In Transit’ Kuala Lumpur, ‘INSTINC 10 Collaboration’ and ‘(in)visible – seeing the unseen’ exhibitions in Singapore, and residencies in Singapore, China and Germany.

‘Passage’ by Lisa Chandler at RED Gallery, Nelson, New Zealand brings together small paintings and works on paper, from 2012 to 2017. Exhibition runs until 6 April.

To view the online exhibition catalogue click on the link below: