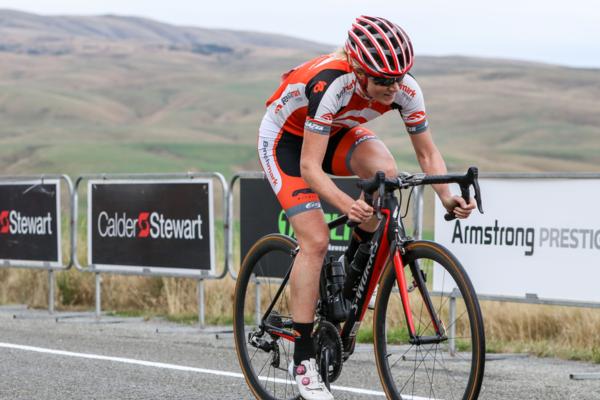 Kate McIIroy won her first race as an elite cyclist in the second round of the Calder Stewart Cycling Series, the Armstrong Prestige Dunedin Classic CREDIT: rickoshatphotos

Having leading Kiwi triathlete Andrea Hewitt on the start line for Saturday’s third round of the Calder Stewart Cycling series, the Kiwi Style Bike Tours Timaru Classic, adds an exciting different dynamic to the racing according to the women’s series leader, Kate McIIroy, who left the international triathlon circuit last year to focus on cycling.

“It’s pretty cool she’s chosen to race in the series,” her former New Zealand triathlon team mate McIIroy said. “I raced against and with her for five years and she’s a strong cyclist so will really add to the racing. She’s the best triathlete in the world right now, so to have her lining up in a cycling event is great.”

Hewitt won the opening two rounds of the women’s World Triathlon Series and has her eyes on the third round in Yokohama Japan in three weeks’ time, so is using the weekend to test her cycling legs out against some of the country’s best domestic based women cyclists.

“I guess I feel like I have been neglecting my cycling to improve in other areas of the triathlon but this is an opportunity in between World Series races to give my cycling a test,” Hewitt said. “My last bike race was in Eyreton (near Christchurch) a while ago. I have no immediate plans to do more cycle races but I'll see how this one goes. I want to help the team to their best result as well and I have some friends racing, so I thought it would be fun to race with them; but it's always more fun when things go well, so that's what I'm hoping for.”

Riding for Benchmark Homes McIIroy, who represented New Zealand at the 2006 Commonwealth Games in the steeplechase before turning her attention to triathlon where she was 10th at the London Olympics and raced at the Glasgow Commonwealth Games, won her first race as an elite cyclist in the previous round near Dunedin to take the series lead off Wanaka’s Mikayla Harvey from the Mike Greer Homes women’s team.

“I’m still learning how to race bikes,” McIIroy said. “I’m soaking it all in and the cycling thing has certainly gone better than I thought it would, so I do want to see where I can take it.”

McIIroy is keen to keep the series leader’s jersey for herself while also wanting to see her team mate Annamarie Lipp hang onto the series Under 19 leader’s jersey. “The rest of the team are all riding well and we’ll do all we can to hold onto our leaders jerseys and team series lead.”

Hewitt will race for the F.A.S.T Cycling Team which has former cross country runner turned cyclist, Deborah Paine currently lying third, just three points behind Harvey and five from McIIroy. Paine continues to impress as a newcomer to elite cycling, with her climbing ability her main weapon that sees her lead the Small Business Accounting QOM Points Classification.

Last year’s women’s series winner, Hokitika’s Sharlotte Lucas (Cycle Surgery), will be looking to pick up some valuable points after missing out of points in the first round when riding as an individual, and then coming home third in Dunedin, fading on the final climb after feeling the effects of racing unwell while Jeannie Blackmore (F.A.S.T Cycling Team) should add to her lead in the senior over 35 women’s classification.

Christchurch cycling coach Paul Odlin leads the elite’s men’s series after also winning the second round, the Armstrong Prestige Dunedin Classic, that featured a tough 14 kilometre climb to the finish. Racing as an individual for the Tineli Invitational Team Odlin says he is looking forward to racing for the first time on the challenging course in Timaru and is “keen to enjoy racing hard.”

Odlin has dominated the Small Business Accounting King of the Mountain climbing competition in the series’ first two rounds to take a significant lead in that jersey’s competition.

The series lead could change in the Under 19 classification, with Hamish Keast (Transport Engineering Velo South) poised to retake the lead off Corbin Strong (Joyride Cycle Surgery) who is not starting on Saturday.

Racing in the three age group categories in the master’s field has been very competitive, with Yancy Arrington (Champion System), Dave Rowlands (Christchurch Mitsubishi) and Chris Latta (Champion System) all wearing the leader’s jersey for the 35 to 44, 45 to 49 and over 50 classifications heading into Saturday’s racing that sees the masters and women tackle 109 kilomtres.

Riding in the master’s series for the first time after performing well in the elite racing in previous years, Southlander Luke McPherson was an impressive overall winner in Dunedin, outsprinting Arrington to win the overall masters race to edge closer to Arrington in the overall standings.

Glen Rewi (Christchurch Mitsubishi) was third in Dunedin to add to his lead in the Small Business Accounting KOM Points Classification while his team mate Rowlands will once again be amongst the favourites for overall line honours.

This course is made up of two laps of a circuit from Pleasant Point and includes a short extra opening lap for the elite race that sees that event cover 148 kilometres. The course is relatively flat for the first 15 kilometres until the race turns right onto Cleland Road which leads into a two kilometre climb that could provide the platform for the early race break away in the racing across the various events.

The route also features the one kilometre Gays Pass Climb that kicks up to thirteen percent. At 17 kilometres from the finish on the last lap it could be a launch pad for a brave solo move by the likes of McIlroy in the women’s race or a select group to sneak away.