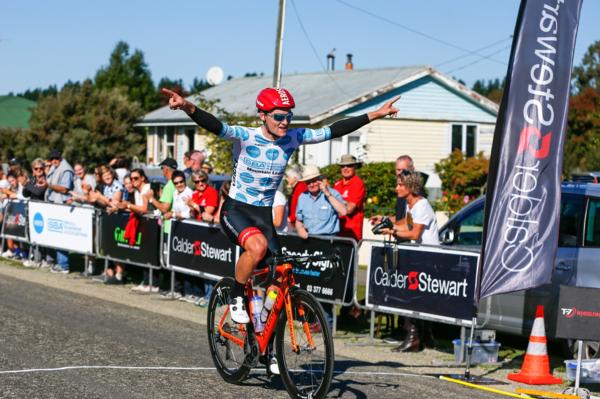 Zenovich and Milburn were too strong heading up the Cleland Road two kilometre climb on the last lap, dropping Hubbard and Lawson and then Zenovich made his winning move on the one kilometre Gays Pass climb that kicked up to thirteen percent 17 kilometres from the finish line, getting rid of Milburn and soloing to win the 148 kilometre race in three hours and 36 minutes, almost two minutes clear of the former BMX rider.

“I’m pretty happy to take the win after I haven’t really touched the bike this week after winning the Tour de Lakes last week, so it’s great to have done the double,” Zenovich said. “I felt pretty average to be honest, but the team plan was to soften everyone up and then get a good move to go later on and I think we did that.”

Josh Hagerty (Transport Engineering) proved to have the best sprinters legs to claim third out of a chasing bunch of six riders that included Lawson that finished just over a minute behind Milburn.

Wanaka’s Mikayla Harvey from the Mike Greer Homes women’s Black team was seventh, collecting enough points in the main bunch sprint finish that was seven minutes behind Lucas to reclaim the women’s series leaders’ jersey from Kate McIIroy (Benchmark Homes) who was eighth.

“It was an awesome day,” Lucas said. “It was hard from the start after we got into a five person break and I got away with Elyse (Fraser) was about 10 kilometres to go, so it was a big effort over the last 10 kilometres. I just gave it a big attack on the last corner before the finishing straight and managed to get a gap and keep it so was happy to get the win.”

Jeannie Blakemore (F.A.S.T Cycling Team) got away from the main chasing peloton in the closing kilometres to finish sixth, but more importantly was the first senior over 35 women to finish to consolidate her series lead while Annamaire Lipp (Benchmark Homes) was the third Under 19 rider home, which was enough to keep her lead in that classification. The days leading women’s team was the Mike Greer Homes Black team and Deborah Paine (F.A.S.T Cycling Team) kept her Small Business Accounting Queen of the Mountains leaders’ jersey.

Wellington’s David Rowlands (Christchurch Mitsubishi) restamped his authority on masters racing, dominating the days break and easily winning a sprint finish with Brent Allnut (Placemakers), winning the 109 kilometre race in two hours and forty minutes to move further ahead in the masters series 45 to 49 age group while Allnut’s effort saw him move into the 35 to 44 classification lead. The days winning team was Christchurch Mitsubishi.

“The team rode really well,” Rowlands said. “We put some guys up the front, Glen (Rewi) and Gavin (Manson) who managed to get some KOM points. I then got across to them and we pulled away and ended up with a break of eight riders that over the course of the race split a few times and came back together until I managed to get away with Brent Allnut and we rode well together and I managed to get the sprint.”

The series now breaks for winter getting underway again in Nelson on Saturday 9 September.