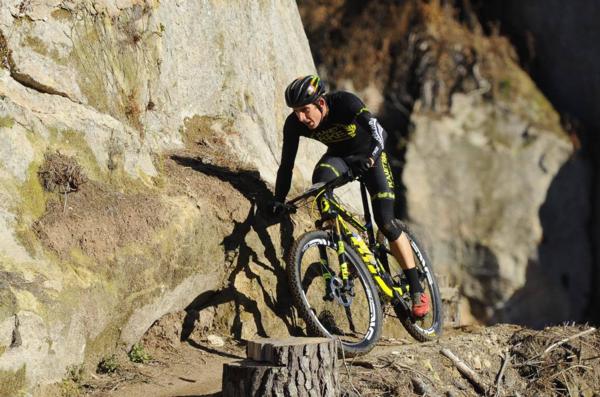 How do you measure the health of a sport? It is a complicated question. But if you can judge upon the calibre of athletes it attracts, then todays Craters Classic MTB event at Wairakei Resort near Taupo proved that XC Mountainbiking in New Zealand has never been healthier.

On a stunning winters day in Taupo it was the performance of the “cross-over” athletes that stole the show. As the day’s standout performances featured athletes better known for their running, triathlon, multisport, and road cycling achievements.

The men's race saw XTERRA Triathlon star Sam Osborne finally getting the better of a titanic battle with Wanganui’s Glenn Haden. The pair had set a frenetic pace from the gun, slowly dispatching rivals until it was just two. With neither giving an inch it wouldn’t be till the final 15minutes that Osborne would finally snap the virtual bungy that had held them together all race long.

“Yeah, I had a really good go when I went. I wanted to attack a number of times earlier but I just couldn’t get around him” Osborne said. “I had too. That boy was strong. He was definitely dropping some Watts!” It was a great result for Osborne, who had been looking to sharpen his form before heading to Europe later in this month to continue his pursuit of the XTERRA Global tour.

It was a great performance from Haden, who only pulled his MTB out of storage 2 weeks ago after a summer spent focussing on Road Cycling (including a Bronze at the National TT Championships). Having blown out the cobwebs he’ll be a marked man in upcoming MTB events.

The surprise of the race? Young Manawatu protégé Max Taylor, the current National U17 champion. As a Junior rider starting in a later start wave, Taylor scythed his way through the field in an impressive solo effort. Dominating the Junior proceedings and pipping Haden for 2nd overall (on elapsed time) by just 7 seconds.

The Women’s race was no less impressive, with multiple riders in the hunt as the race wore on.

With the early pace set by Samantha and Rebecca Kingsford, in the end it was the MTB experience of Amy Haddon to the fore. Ultimately stretching out a gap to cross the line 90sec clear of Emma McCosh, with Josie Wilcox just seconds in arrears for 3rd.

For Haddon it was great reward for consistent performances in recent years, and an impressive comeback from a shoulder injury suffered during The Pioneer stage race earlier this year. Having won the 25km Multisport title at last week’s 3D in Rotorua it was clear Haddon was in good shape, and she proved it today.

While McCosh’s name is not unfamiliar to the endurance sports community, it is not MTB, but rather multisport and running where she has previously starred. And what of Wilcox? Perhaps the surprise of the day, as a new face and name to many. But one it would seem the MTB community might need to get used to seeing more of.

Wilcox was former NZ Triathlon academy athlete, before heading offshore spending 4yrs in the USA on a college running scholarship. Since returning to NZ she spent an increasing amount of time on an MTB, and it seems she may have found her niche. With such an athletic pedigree behind her, the skills and race craft will only improve with experience, and it will be  fascinating to watch the progress.

For many years now the Craters Classic has been building toward “must do” status. Amazing flowing trails, stunning winter weather and a fantastic event location have all contributed to what is now a sold out event.

But it is the quality of the field really tells a story. The performance of the cross-over athletes says it all. Top shelf athletes, giving their all, and loving every minute.

MTB is on the rise. Again.