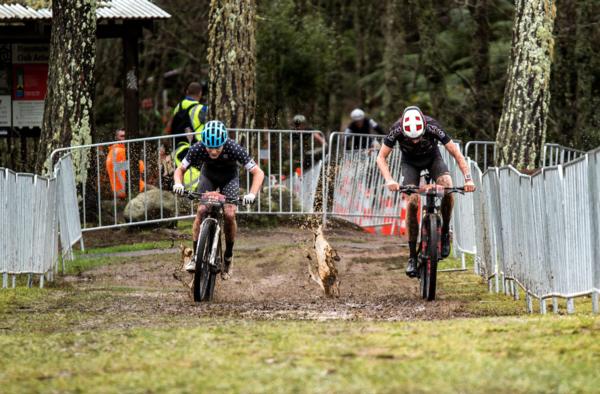 For many years the Cyclezone Winter Series has long been a proving ground for new MTB talent; and so it was on Sunday as two fresh faces broke through for their first major wins.

While heavy overnight rain drenched the trails, it did nothing to dampen the spirits of the athletes, nor the quality of the racing. With 30mm of rain falling through the early hours of the morning, organisers were forced into course changes in the interests of safety. But in an ironic twist, this simply helped create some of the closest racing the series has seen.

Sprint finishes, and tiny winning margins proved the order of the day throughout the various race distances. The only exception the outstanding ride of Sammie Maxwell in winning the women’s mid-course race by a staggering 12 minutes, as the Taupo teenager finished an impressive 11th overall (of 180 riders)

But it was the feature Long course categories where the real excitement lay.

Cosmo Bloor emerged triumphant after prevailing in a hectic sprint finish with Lewis Ryan, as they were closely followed home with barely 1min separating the first 8 finishers. Bloor was delighted with the result. “It was a really close battle the whole day. There was a bunch of us together and we split and regrouped a number of times. It was definitely a day of being in the right place at the right time.”

It marked a welcome return to form for Bloor, who after strong results as a junior took some time away from the sport, but has recently rekindled the passion. “The Rotorua Racing team has helped me a lot. I was able to use road to keep racing. That started a new passion for me. I think on today’s course the strength I’ve gained from all of the road training really helped.”

The Women’s race would also see a fresh face topping the podium as Josie Wilcox confirmed her arrival as a serious player on the New Zealand racing scene. A relative newcomer to MTB, the former runner gets better with every outing on the dirt.  Wilcox controlled the race after quite simply riding away in the early stages, doing enough to take the win just 34sec clear of Jessica Manchester, and Fiona MacDermid in 3rd

Manchester was quick to praise Wilcox. “I tried to keep on her tail for a while but I just didn’t have the speed so rode my own pace. Didn’t see much of her all race after that in all honesty! I just kept pushing, and did my best. It was close at the end but I was stoked with my result. I had fun out there and that’s all I ever want when out racing.”

They will all be eagerly awaiting the chance to do it all again at race 2, on August 6th