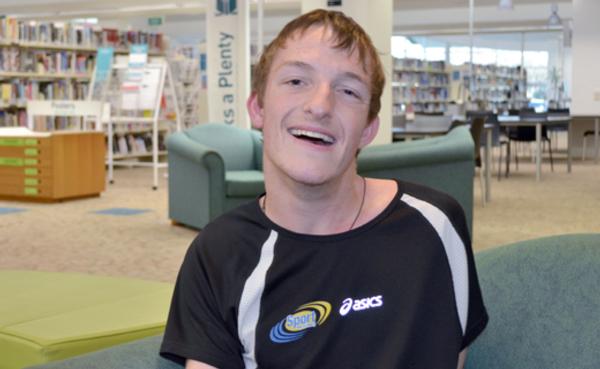 Cerebral Palsy No Barrier For Mark

When Mark Wilson was younger his parents were told he’d never walk or talk. Born with cerebral palsy, a disorder that affects around 7,000 New Zealanders, Mark has had to overcome more than most. He’s had to endure high school bullies, and the challenges that come with not being able to write or type.

“Life at high school was less than desirable,” Mark recalls. “The social pressures are tough for any student, let alone one with a disability. I got to a point where I would sit alone and try my best to hide.”

But Mark was bright and had a keen interest in the business world. He finally got a break after meeting Peter Richardson, Head of Business at Toi Ohomai Institute of Technology, at the end of Year 12 in 2013.

“When I met Peter he wanted to talk to me – not my parents. That’s the first time I’ve ever had that. Peter just asked me what I wanted to study and found a way to make it happen. I can’t believe how easy he made it!”

After that meeting Mark decided to leave high school a year early and sign up for the NZ Diploma in Business.

It was a good decision, he says – the best he’s ever made. And now, after four and a half years of hard slog, Mark has his NZ Diploma in Business, and is about to graduate with a Bachelor of Management Studies, majoring in finance and strategic management with the University of Waikato, in partnership with Toi Ohomai in Tauranga.

When Mark reflects on the transition from high school to tertiary life, he admits it wasn’t always easy.

“The first week was terrifying. There were times during my study when I couldn’t see the light at the end of tunnel, but I kept going. It helped that the people were friendly, and the disability team at Toi Ohomai really had my back. They provided me with a note taker, test support and made it easy for me to access the campuses. I pretty much made the Bongard campus my second home.”

Michelle Te Moana, Equity Facilitator at Toi Ohomai said she and Mark took time to learn from each other about the demands of the qualification and what would work for Mark.

“Mark came with the intention to treat study like a job and he did just that. He maintained a high work ethic and high grades the whole time.”

With his newfound financial and strategic business knowledge, Mark is keeping busy helping his parents with their business, Aluminium Artistry.

“I’m trying to bring them up to speed with the 21st century. I’ve been putting systems into place to streamline things, goal setting, culture type stuff and basically just wherever I can help. It’s good to be able to repay them a little bit for what they’ve done for me.”

Mark also donates his time to the Trillian Trek (formerly the Variety Bash) – a charity that helps sick, underprivileged and disadvantaged children around New Zealand.

The goal from here for the tenacious 22 year old is to find a job in his field.

“I’d like to get a job in finance. I’m just waiting on the confirmation from the University of Waikato now. It will be good to finally hang the degree on the wall.”

Mark wants people to know that having cerebral palsy doesn’t mean you can’t achieve your dreams.

“I’m just like everyone else. Hopefully I’ve shown that people with cerebral palsy can accomplish just as much as anyone can. I’m very determined. I also get a kick out of surprising people. They can’t believe that I can drive, or that I’ve done a degree. It’s all about awareness – someone might see me and think ‘if he can do it, I might give it a go.’”