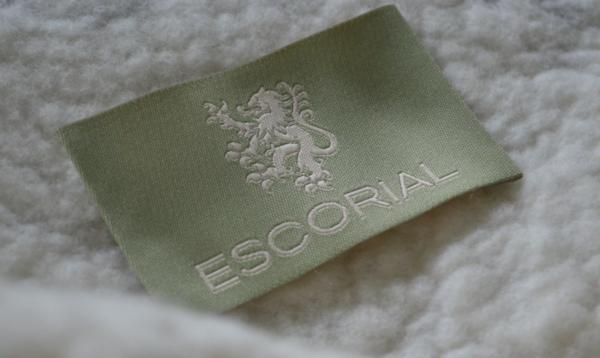 Escorial®, the luxury wool brand renowned for extraordinary fabrics and accessories will celebrate twenty years this week in Paris after first launching in the French capitals Hôtel de Crillon September 1997.

Whilst relatively young in luxury brand standards the full heritage of the Escorial fibre began centuries ago, where it was just as much appreciated for its rarity and luxury then as it is today.

The Escorial story began in the Maghreb, high in the legendary Atlas Mountains with the Berbers. This nomadic hill tribe bred the small ‘Maghreb’ sheep with a fine unusually springy wool before they made their way to Spain in the 11th century with the invading Moors.

Fast-forward to the 14th Century and the Maghreb flocks had built up in numbers grazing on the plains surrounding Madrid. Queen Isabella 1 renowned for her strong will and unifying Spain used the taxes gathered from these special flocks to fund Christopher Columbus’s voyage to the New World.

It wasn’t until the 17th century under King Phillip II’s reign that all the small Maghreb sheep were gathered up for sanctuary in the royal Spanish monastery, El Escorial. This UNESCO World Heritage site with its sprawling grounds was the perfect home for the small somewhat famous sheep, with King Philip II stamping a decree that the soft, luminous ‘Escorial’ wool from these flocks could only be used in garments for European royalty.

The Escorial difference is in the heart of the fibre, performing as a naturally coiled spring that creates lightweight garments that provide comfort and performance

Today, the only directly descendants left from the original royal El Escorial flocks are to be found in limited numbers grazing in Australia and New Zealand. Each season only the best curly Escorial® wool is chosen from these protected flocks.

Escorial® is likened to Grand Cru and rarer than the noble Vicuna.

"Escorial is synonymous with rarity. When a customer wears Escorial not only are they buying an ultimate wearing experience, they are helping to preserve a very rare species." says New Zealander Peter Radford, founder of Escorial speaking from Paris where this week Escorial will showcase its Autumn Winter 2018 collection at the famous fabric show - Première Vision.

Special recipes in the manufacturing process have been developed throughout the years to bring out the best in Escorial and the utmost care is taken in the spinning, weaving and finishing to translate this into an exceptional Escorial fabric.

"Each season the soft handle, resilience and performance of Escorial cloth keeps getting better as our partners continue to bring out the best in the fibre,” says Peter.

“We have come a long way in twenty years and we are excited about the next twenty as more customers begin to appreciate Escorial’s rarity, luxury and wearing experience.”