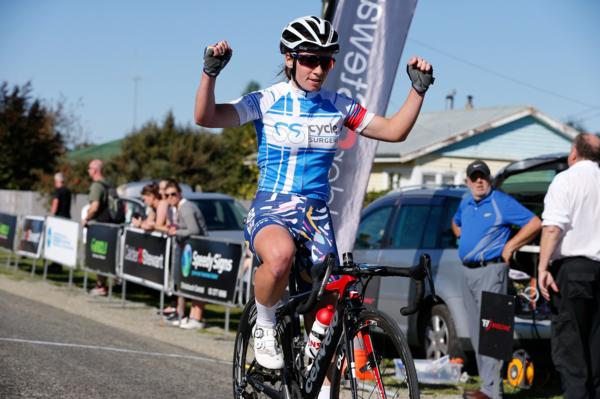 Hokitika's Sharlotte Lucas who won last year's women's third round of the Calder Stewart Cycling Series, the Kiwi Style Bike Tours Timaru Classic, wants to get some racing in before heading overseas to the United States. CREDIT: rickoshayphotos

With her eyes on securing a pro contract West Coast cyclist Sharlotte Lucas is hoping a home advantage will result in a win while Wanaka’s Mikayla Harvey hopes to hold off former pro triathlete Kate McIIroy in a battle for the women’s leader’s jersey when round five of the Calder Stewart Cycling Series hits Hokitika on Saturday.

Dunedin cyclist Brad Evans looms as the elite men’s favourite while Wellington’s David Rowlands (Christchurch Mitsubishi) is once again the stand out rider to beat in the master’s race that contains three age group categories.

Snow falling on the Main Divide resulted in shortened combined racing with no points available for Nelson’s fourth round of the series three weeks ago putting more emphasis on this Saturday’s round of racing, the CYB Construction Hokitika Classic, the second last round before the finale, the Hell of the South in rural Canterbury on October 22.

Saturday’s course is on a tough 32 kilometre circuit with the elite men doing five laps to cover 162 kilometres while the masters will do four laps to complete 130 kilometres and the women will tackle three laps and 97 kilometres.

“Racing on home turf should suit me,” Lucas, who has had a winter of racing in the United States and Australia, said. “I raced well in the USA and Aussie. I raced many of the pro criterium races in America and got a podium and a few top ten’s proving I am good enough to be a pro bike racer over there and am negotiating team contracts to race over their next season.”

Lucas has gone from strength to strength riding for Australia women’s team Roxsolt Attaquer, notching up a number of good results in Australian National Road Series that has included third overall at Amy's Otway NRS Tour earlier this month, and may well have been leading the women’s classification in the Calder Stewart Cycling Series if it wasn’t for missing out of points on the opening round as she rode as an individual so was not eligible for points.

“I’ve flagged my chances of getting into the leaders jersey for this series due to not getting my points in the first round,” Lucas, who now rides for Cycle Surgery Women in the series, said. “So the overall lead is a two rider contest between Kate (McIIroy) and Mikayla, so I will enjoy the Hokitika race and the luxury of not having to travel for hours to get there.”

Lucas thought the women’s race in the CYB Construction Hokitika Classic will come down to a sprint finish so think’s McIIroy’s Benchmark Homes team will combine with other teams that lack strong sprinters to try to break up the race and put the better sprinters, that includes Lucas and Harvey, under pressure.

McIIroy and Harvey are locked together at the top of the women’s points table on 55 points.

Harvey said she was “really looking forward to getting back into racing, with her last race being the Colorado cycling classic in August with her Team Illuminate pro team. “It will be exciting being back with Mike Greer Home Women’s Cycling team, and hopefully I can utilise some of the knowledge I gained while racing in America; especially the importance of team work.”

Harvey has not raced in Hokitika but said she was hoping for some tough conditions to “really blow the field apart.”

“Pretty much I’m just keen for some fun and hard racing. I always go into a race really determined and it will be interesting to see all the tactics play out on the weekend. I will definitely be fighting to hold onto the leader’s jersey.”

Riding for PKF Waterproofing Concepts Evans won the series opening round of the elite men’s race in the series in late February but then missed the following two races as he was overseas riding for his Australian Continental team Drapac Pat’s Veg Cycling.

Evans has notched up a series of impressive results this year including winning the Port of Portland-Fulton Hogan Tour of the Great South Coast in July that saw him take the series lead in the Australian National Road Race series, only to be overtaken recently by Australian based fellow Kiwi Joe Cooper. He also won Cycling Timaru's two-day tour in August.

“The form is coming up as I build for the Tour of Southland,” Evans said “It looks like a strong field so I'm looking forward to a tough race. Hokitika usually suits me with the course and weather at this time of the year. I've podiumed there a couple times but not won.”

The elite men’s series leader is Christchurch cycling coach Paul Odlin (Tineli Invitational Team) who holds an 11 point lead over Mike Greer Homes Racing Team’s Sam Horgan but is only one point ahead of the Under 23 series leader Jake Marryatt (Blackmax Performance).

The young Team Škoda Racing line-up should feature, backing up a strong showing in Nelson that saw Connor Brown claim the win in the reduced event. He will have good support from Chris Denholm and Max Jones.

While Rowland’s, the 45 to 49 age group leader, will be the man to beat in the masters race Christchurch rider and 1991 Tour of Southland winner Stu Lowe has been a good recent form so should make his presence felt.  Whether Southland’s Placemakers Luke McPherson will attempt to take the masters 35 to 44 classification leader’s jersey off his West Coast teammate Brent Allnut, who is locked in second place on 61 points with Yancey Arrington (Champion System Blue), should add some spice to that age group.

Nelsons double winter and summer Olympian Chris Nicholson (Freshchoice Richmond Pomeroys) will be keen to build on his lead in the over 50s classification with Christchurch rider Blair Stuthridge (Protcol Mackleys Yellow) his closest threat, 14 points in arrears.